Several of the women associated with the Fashioning Circuits blog recently took their skills to the Design Your World Conference to teach young girls aged 10-12 how science can be fun. Specifically, with the coordination and leadership of Amy Pickup, we conducted a workshop about the LilyPad Arduino.

The computers were set up and ready to go when the 15 girls came in and we were ready to teach!  Amy lead a great discussion on the history of the LilyPad Arduino, then showed a video with some example projects, and went over all of the elements and add-ons for the LilyPad. Then it was on to the brainstorming session.

Each of the volunteers took a group of 2-3 girls and helped them come up with ideas and ways to use the LilyPad to create new clothing designs or functionality. It was really interesting to see what their young minds came up with.  Two themes that I picked up were dealing with fear of the dark, like a glowing teddy bear that turns off after a set amount of time,  and creating fun gimmicks to wear at school, like a backpack that blinks your name. Other ideas included glasses that would make a sound or light up if you lost them, and socks that would tell you when they are stinky.

Finally, it was time to get down to business and start coding! Each group had a computer, a LilyPad, an LED, some alligator clips to make connections, and directions on how to make it work. We started with attaching the LilyPad to the computer and then moved on to basic circuit completion. It was great to see how fast these girls learned! 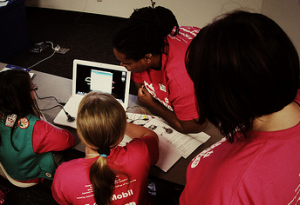 Once the LilyPad was attached, we exported the “Blink” sketch. Talk about excitement! It’s always fun to hear people’s first reaction to seeing that light blink for the first time. There’s something so magical about being able to program a piece of hardware and make it do what you want it to do!

Next, we decided to change the code, to help the girls learn how to change the defaults and think outside the box. Unfortunately, some of the computers were not sending out the revised code correctly, but we were able to share the computers that were. 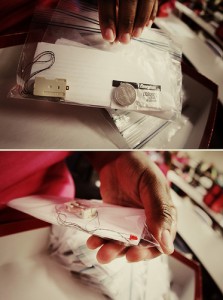 I think the most popular part of the whole day was the take home kit, which included one LED, a battery, battery holder, and some thread. The Amy taught the girls how to attach the LEDs directly to the battery to make them light up, and they went to town!  That instant gratification of creating something with a closed circuit was key, in my opinion in teaching the girls to appreciate the simplicity and potential of electronic fashion.

Several girls asked how and where they could order the parts for the LilyPad Arduino, and talked about what they were going to make with them in the future. I really hope that those girls do order and play with the LilyPad to create their own projects at home. If even one of them becomes more interested in science, and technology, then the workshop was a success.

Learning about coding and engineering in a creative, girly, group activity hopefully helped these girls realize that science and math are not just for boys. Although it has become more acceptable in society for women to be smart, that has not translated over yet to science, math, and paychecks. Encouraging young girls to explore math and science through things they already love (crafting, fashion, blinking lights),  will hopefully translate into a more interest, and a more level playing field in those area for their generation.

Future related workshops and a summer camp are in the works to help teach young girls to appreciate coding and science through crafting.