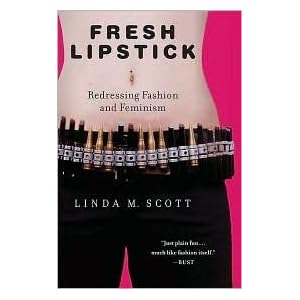 First off let me state that this is not a fashion book. Nor is it a beauty book. Nor, and you may find this surprising, is it a feminist manifesto. Still interested? Good. As the title suggests the author, Linda M. Scott, offers a fresh perspective on the relationship of fashion to radical feminism. Now you may be asking, “What relationship?” That universal misunderstanding is precisely the stereotype that Scott tackles, head on, in this volume. Professor Linda M. Scott, with meticulous research, challenges the longstanding assumption that fashion and feminism exist in stark opposition to each other. In a nutshell, Fresh Lipstick: Redressing Fashion and Feminism is a revisionist approach to the history of fashion and feminism.

Feminism: The Good, The Bad, The Pretty

One of Scott’s most salient revisions to feminist history appears in the opening chapters of the work which examine the origins of the first wave of the movement. Per Scott’s retelling American “feminism” had less to do with establishing equality for women than it did with asserting and maintaining strict demarcations of class and social status. Scott characterizes early feminists as wealthy, and upper middle class, Caucasian women mainly concerned with improving the social standing of wealthy and upper middle class Caucasian women. Take, for example, Scott’s depiction of the movement’s attack on the corset. Much early feminist rhetoric lambasts the evils of the corset. A deliberately uncomfortable accoutrement, it literally held women prisoner within their clothes by making even basic movement all but impossible. So early attacks by feminists were indeed not unwarranted. What makes Scott’s take on the controversy unique, however, is that – as she points out in meticulous detail – the only women who wore corsets were women of a certain class. You guessed it, the women of the American aristocracy. As Scott reminds us slave women certainly didn’t wear corsets, nor did immigrant women or working class women. So exactly whose rights were these early feminists fighting for? This is a theme that underpins much of Fresh Lipstick, in fact.

Much feminist rhetoric, both contemporary and historical, extols the virtues “sisterhood,” essentially giving the impression that one merely needs to possess a vagina in order to be represented by the movement. Scott, rejects this representation as pure fiction and details a history of feminism that is far more dubious – or at least class, race and appearance conscious. Per Scott both first and second wave feminists defined feminism in very narrow terms and deliberately excluded certain classes of women from the movement. Scott details a history of feminism that is particularly exclusionary to women who fall outside of the feminist ideal – whatever that ideal happens to be at a given time. Scott also challenges feminism’s attack on the beauty and advertising industries and argues that feminist literature attacks these industries while completely disregarding social and historical context. Though Scott makes a valid point here perhaps Fresh Lipstick’s biggest weakness is that it makes no distinction between academic and popular feminist literature. While I don’t disagree with Scott’s assertions in this regard it does warrant mentioning that many of her arguments regarding feminist “dogma” make sweeping generalizations of the movement, effectively painting all feminism with the same brush. Ironically this is a crime that Scott nails feminist leaders on again and again.

Still, one of the things I found most interesting about Fresh Lipstick is how it challenges the anti commercial rhetoric associated with contemporary feminism. Scott asserts that not only is there no over-arching conspiracy perpetrated by the collective beauty industry to coerce women into buying products that they don’t need, but that there never has been. Scott traces the history of female targeted advertising and makes a very convincing argument that throughout history much of the advertising directed at women has been researched, developed and written by women. In Chapter Six Scott details the history of one of the most famous advertising campaigns of the twentieth century – one, in fact, that many credit as the first advertising ever to “use sex to sell a commodity”. (179) The ads, which first appeared in 1911, were for Woodbury Soap and were developed from concept to execution by Helen Lansdowne Resor, Creative Director of J. Walter Thompson. JWT was the largest advertising agency in America for half of the twentieth century and Scott makes a point of illustrating that Resor was hardly a professional anomaly.  In fact until well into the 80’s most advertising agencies, as a fundamental part of their hierarchical structure, included highly active “Women’s” departments that were responsible for developing advertising, including market research, copy and creative, to appeal to women.  These departments were often the largest, most influential and most profitable in their respective agencies – and were typically completely staffed by women.

These are only a few of the book’s eyebrow raising revelations regarding the history of fashion as it relates to American feminism. Indeed Fresh Lipstick’s challenge to feminist rhetoric is quite extensive and highly organized, examining the movement from it’s nascency to present day . Backed up by a staggering amount of meticulous research, the book is both a fun and enlightening read. I highly recommend it for anyone fostering an interest in the history of the feminist movement, or how feminism helped to shape the American fashion industry.