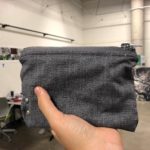 This paper aims to describe and analyze the making of the project called “Our Technology is a Little Shy” in the practices of critical making. This project was completed as part of the course Critical Making in the program of Arts Technology and Emerging Communication at the University of Texas at Dallas. The paper briefly explains: how did the critical aspect and the physical shaping of the project emerged, what are the various technologies and methods used, what were some of the major troubleshooting faced in the making, how does the final object addresses and reflects some of socio-cultural issues that were aimed in the beginning, and finally, how it can be positioned as a product of the critical making.

The making of this project has started with a moment of inspiration that made me imagine how we may perceive and feel responsible for digital technology. Winner in his article “Do Artifacts Have Politics?” talks about how technological artifacts may have various degrees of political qualities in their making which can either reflect a more flexible or intractable pattern of power and authority (38). A similar approach is how Latour in his actor network-theory chooses to give a sense of agency to the technological artifacts to understand the relations among various actants from the point of producing science-related knowledge. But in either case, the political – which leads to discrimination or inequity in the society – or the agential quality is examined through the practical implications and the use-case scenarios which is derived from the physical inscription of the said technology. Most of the time, technology only becomes visible and the center of attention when its functionality or accuracy is ethically or mechanically questionable to the human actants. In these discussions, there is always a level of deterministic or constructivist sense of understanding technology but not keeping an open understanding and appreciation of how the technology may choose to feel and act within the societal circumstances. Although this is not to claim that technologies are feeling entities that we should hold responsible for mistreating and not giving voice, but to suggest that, with a more humane sense of caring, we may get to see how our own politics and agencies of producing and using technologies have moral traces among all aspects of the network of relations that results in the given political assumption.

Coming down from the issues of care, agency, and politics of technological artifacts, I decided to build a project that not only humanizes a technology but also, give individuals a moral situation with a circumstance that further complicate and question their common behaviors of reaching for a technological artifact. The project is about a search for technology in this case, a mobile phone – within a pouch, we are partially aware and in control of. When the pouch is closed by the zipper, we hear a ringtone coming from inside the pouch (Fig.1.1). But when the zipper is opened, we do not see any technological artifact. The sound of ringtone also immediately vanishes instead, we feel a vibration – like a heartbeat – coming from the pouch. In this instance, there is nothing to be seen inside the pouch except for the lining fabric. When the zipper is closed, we continue hearing the ringtone coming from the pouch and the cycle continues. In this imaginary scenario, the mobile phone shows two very opposite characteristic one is purely functional the other is an emotional response. When they are combined, the mobile phone neither neglects the functionality nor exposes itself to the possible use. Since the initial problem arises from the mobile phone being hidden but not being broken, it eliminates any need for general maintenance or problem in manufacturing because the problem originates from the affectual relation between the user and the technology. In the act of opening the pouch, the mobile phone starts to show an indication of
fear by the feeling of a heartbeat coming from inside like it is hiding from the individual that opens the pouch. At that moment, the technologies have no option but to desperately waits for that individual to close the zipper back.

The title “Our Technology is a Little Shy” sarcastically refers to the discourse that people tend to use when they feel embarrassed in a situation of disobedience of a (partly) conscious agent resisting to a request. In our case, the technology is humanized to the point that we are witnessing its fast beating heart when hiding, giving us a visual and tactile sense
of its conscious existence. To further saturate this insecureness and resistance, the technology is to be fused with the fabric of the pouch in which it becomes almost impossible to separate the technology from its enclosing container without damaging either.

The first stage of making the project was the sketching of how the pouch should look from the outside visually and how the technology should be embedded and arranged inside functionally. At this stage, I also decided and purchased which technological and crafting materials I would need in order to make this project. For the technological side, I used: Arduino LilyPad, LilyPad buzzer, LilyPad vibe board, conductive thread, and e-textile battery. The reason I chose using LilyPad products is that they are highly compatible with the uses of fabric and the circuitry is as simple and robust as it gets considering other Arduino products. For the crafting materials, I used: fabrics for the outer layer, middle layer, interfacing, and lining, thread, and zipper. Before starting with the actual material, I made various test runs on scrap fabric to see what is the best way to saw and fold the fabric which would eventually become a pouch. The problem with making a pouch is that it needs to be closed off and durable all the way so that nothing will fall from the inside (Fig. 1.2). In this case, the electronic components once installed, cannot be replaced or fixed because all entries except for one small hole – will be closed off. Because the aim is that the people interacting with the pouch should not be able to locate or see the electronics otherwise it may lose its mystical feeling. The small hole mentioned is placed on the side of the pouch and the entry is closed with two small buttons that connect both ends. Only when the button is peeled, they can put no more than two fingers to reach the electronics. The reason for putting this hole is for replacing batteries when needed, otherwise, it would run out and does not work anymore.

The system is arranged so that the sensor (the slider of the zipper) acts as a switch between the two actuators (buzzer or the vibe board). The way that the sensor works is the part with most troubleshooting because, instead of using a technological component, the switch is triggered by the slider part of zipper connecting the two ends of conductive thread (one is connected to 5V the other one is to a digital port) (Fig. 1.3). So basically – because the slider is metal – when it reaches the end of the zipper, it conducts electricity across two ports which translates into the value going from 0 to 1. For the buzzer, first I identified 2 octaves of notes in the library, and then arranged the melody known as “Nokia Tune”. As for the vibe board, I set up a heart-beat like vibration sequence so that whoever holds the object may feel that rhythm by the pressure in their hand. When all components are in place I have tested both the voltage distribution over all conductive threads, check to see if the zipper works effectively, and make sure the code works as intended. I must admit that I had to redo the circuity for 3 times but eventually I managed to get a good result. Finally, I did all sewing over the pouch so that it would be closed off.

With all the parts added, this project was designed to complicate and morally question the mode of interaction which begins with an almost innocent act of opening a pouch. But this project gains its momentum especially from such already familiar patterns of trying to respond to a mobile phone when it starts ringing. These type of “patterns of activities and expectations that soon become ‘second nature’” (Winner, 11). It leads up to a life that is impossible to think without as they “shed their tool-like qualities…[and] become part of our very humanity” (Winner, 12). The way that this project takes on a pattern of technological activity that we associate a reflexive and physical response to and fold it into a loop that
morally problematizes our position as a “possible user” stimulates debate may also be seen as “…a parallel design activity that questions and challenges industrial agendas” (Dune and Raby). In that sense, this project may be positioned as a critical design of a technological artifact that is and is not really there. It explores ethical and social issues through a hypothetical product with an imaginary use-case scenario that makes us think (Dune and Raby). But in the act of losing the object boundaries, there is also the further inquiry of how do we perceive the pouch in relation to the technological artifact. From the point of an individual who investigates the object, the pouch presents a material space that the technological artifact is intensively fused with. By the level of curiosity, the pouch may even be considered as the technology itself. To briefly analyze, in the act of searching for the mobile phone, the pouch becomes a closed system in which the individual starts to investigate its physical attributes and tries to find any gaps that might lead to where the technology resides. But the fact that the technology mentioned is not arranged in a single point but rather scattered all around, makes the pouch an inseparable part of that technology. The object is acting as a prototype in a sense that, it is ever-changing into different modalities by the various degrees of interaction and interpretation (Galey and Ruecker). As a prototype that urges critical thinking, the pouch eventually becomes “a process of critical inquiry itself, not just the embodiment of the results” (Galey and Ruecker, 406). By turning a simple gesture of opening a pouch into a productively contestable mode of interaction, the object gets to keep both a functional and emotional quality. In this two-folded complex nature, the technology also moves in between the different forms of care in a way it can only get a glimpse of
“caring for” while the technology is being shy about it (Ratto). By producing temporary moments of affectual relation between an individual and a technological artifact, the definitions of agencial and political qualities may be at least broadened to a degree that, makes us see behind the patterns of activities and expectations of such behaviors.