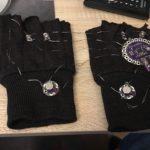 A phrase that I’ve only recently encountered yet hear quite often around Fashioning Circuits is that sometimes we must fall back into the theory. I’m still new to the practices of critical making, so the phrase has mostly struck me as a backup plan. If one’s project doesn’t work as intended, find a way to make it work. Find some theory that says that failure is okay and that we learn more from mistakes than perfection. The idea that one should retroactively apply theory struck me as one of necessity rather than ingenuity. As I worked on my own project, I quickly found that phrase to have a new and much more expansive meaning.

My “Holding Hands” project was, in my opinion, simple in scope: a pair of gloves sewn together with conductive thread that would allow two people to communicate with one another through button presses that trigger different vibrations. My inspiration for this project was the promotion and entanglement of intimacy in analog games like Consentacle and digital titles like Realistic Kissing Simulator. Thinking about how these works and others illustrate the many ways people communicate with one another led to a reflection on how I communicate with my partner and the weird language we’ve made in the years we’ve known each other—inside jokes, vocalizations, clothing choices, minute movements, body posture, and smaller details that I’ve yet to put into words.

As I worked to create the Holding Hands, the project evolved. It went through quite a few iterations in my mind before ever being set to paper. The most ambitious of these was to have the hands operate apart from one another, communicating through radio frequencies or Bluetooth. But the complexity and cost of this version provoked a more sensible mutation. Joined together, the gloves would only require one power source. Three buttons per glove allowed for a range of vibrations (high, medium, and low), and the vibrations would fluctuate between these ranges when multiple buttons were pressed. I specifically avoided assigning meaning to the buttons beyond this, as I wanted people to navigate the creation of a shared language of intimacy.

After obtaining my materials, I set to work. Having practiced using conductive thread in Dr. Kim Knight’s Critical Making course, I felt confident in my capacity to sew the circuits into a pair of woolen gloves. This confidence was quickly dashed when my test code revealed how poorly my circuit was constructed. I allowed slack in the conductive thread so that the gloves could be worn comfortably, but this slack made contact with other parts of the circuit, causing the motors to run without prompting, running the battery down, or preventing the buttons from working at all. Any attempts to repair the circuit caused the gloves to unravel, and I had used fabric glue to attach my electronic pieces, which would either tear apart the gloves with their removal or leave large, unsightly spots all over the gloves. Deeming the first prototype a failure,
I began again from scratch.

The second set of gloves were less fashionable than the first, but the material was easier to work with and half the cost. The gloves were also, as I soon found out, a bit flammable. Some strands of the conductive thread wrapped up with the gloves and formed a small circuit, emitting a noticeable plume of smoke. I disconnected the power and reworked the circuit, only to find a bright-orange glow coming from the same spot: roughly where the coin cell battery attached to the Arduino Lilypad. Frustrated, I decided it would be safer to instead route power through the
USB connection. While this tactic worked, the wiring had been constructed around the coin battery and its holder, and my attempts to redo the circuit once again fell into the same issues as the first.

I purchased a third pair of gloves, plotted out the course of the circuit without the battery, and did my best to use the least amount of thread possible while still allowing the gloves to work. At this point, I was less concerned with the concepts I had started with and intensely focused on making something workable. Instead of three buttons per hand, I trimmed it to two each to ensure my power supply could run everything and to conserve thread, which was swiftly becoming a precious resource. Thankfully, this third attempt turned out alright, as all buttons worked as intended and the motors vibrated at similar speeds on high and low settings. The button placement could have been better, but at that point, I was happy to just have something to present.

Admittedly, the coding element of the project, the part that I dreaded most, turned out to be significantly easier compared to composing the gloves themselves. It was, after all, making two buttons operate a motor and mirroring the code for the opposite glove. Even varying the speed of the motor’s vibration wasn’t that hard after learning what specific phrases to type. Do I understand coding better as a result? I’m not sure that I do; since most of my time was spent reworking the gloves over and over, I didn’t have the time to experiment and blunder around the code as much. I now know some basics of coding, but the code felt like such a minor part of the experience for me.

By the time I finished the gloves, the result looked noticeably different from the original concepts I had intended. Where the first two had been closely sewn together to avoid ripping the circuit apart, the only thing holding the third pair together was the conductive thread. These
threads could easily touch one another and make the motors shake unwarranted. Where I had planned on a set of three buttons nestled at each partner’s fingertips that would operate the motor in different ways depending on the combinations of buttons pressed, two buttons that only ran the motor at a high or low frequency rested in not-as-easy-to-reach locations. Instead of glamorous gloves that could blend the thread into the background with soft grey wool, a pair of drab brown gloves with severed fingers remains linked to a computer.

To my anxious mind, the gloves are a shoddily constructed mess that barely functions and could explode into flame at any moment. This fear of my own work no doubt rests on my inexperience with physical media and with the processes of critical making. My experiences with knowledge making can be summarized as this form here: the essay. What matters is not the hours spent revising, deleting, amending, and pausing to think of what to write next. An essay does not exist until it is completed. Until then, it’s merely a draft, a could-be paper that amounts to a gust of wind. Although I did not actively think of this analogy during the creation of the Holding Hands, I felt its effects. I could catalog and record every moment of my struggling, but hours of footage mean nothing if the item that comes out of it does not work.

This is not a problem isolated within my head but a worldwide phenomenon. Scientists are pushed toward showing that their experiments will change the way we live and think about what it means to live, not the hundreds of thousands of experiments that prove what we already
know or the numerous experiments that failed to produce anything of similar value (Head et al 1). Some have even started “p-hacking” by selectively reporting the results of experiments or ending experiments early if they show positive results (Head et al 1). The rigor of the process and anything productive that might come from a failed experiment or insignificant result means little to an academic community that prioritizes positive results that can be published (with the inherent drive to sell additional copies of said publication).

I have been wrapped up in this same line of thinking. Failure had to be avoided at all costs since only success mattered. I avoided exploring the many ways I could fail to complete the project or the myriad half-successes because I was obsessed with “completing” the project. But success isn’t the only way to learn. Judith Halberstam writes in The Queer Art of Failure that “Under certain circumstances, failing, losing, forgetting, unmaking, undoing, unbecoming, not knowing may in fact offer more creative, more cooperative, more surprising ways of being in the world” (2-3). Similarly, Matt Ratto’s famous article “Critical Making: Conceptual and Material Studies in Technology and Social Life” explores the ways that his RCA/Imperial workshop failed but recounted and reflected upon its failure rather than not including it (254-255). He later relates this time that was “wasted” (i.e. not successful) was, in fact, part of the process, “[Caring]—not just in terms of feeling but also in terms of applied, responsible work—is what makes objects…come to have meaning…” (Ratto 258). Without the hours of frustration, the fretting over whether to snip the fingers off the gloves, and the act of starting again and again,
the Holding Hands would just be a mass of cloth and wires. But because I have failed and have “wasted” time on these fingerless mittens with electricity coursing through them, I know that I have learned something, at least.

What I needed to understand and what I’m still grasping at is the idea that we must fall back into the theory sometimes; we must reflect upon the work we’ve done to uncover what we have learned. Looking back, the Holding Hands do convey physically some of the metaphorical connections of intimacy. Communication can still occur between partners, albeit in a fashion akin to Morse Code. But reflecting on the project’s failures, a larger narrative of the perils of intimacy forms. Intimacy is messy, full of miscommunication, short circuits, flare-ups, and disconnections. The forced closeness accentuates our physicality, and the contorting of one’s hand to find the buttons and achieve a comfortable position requires cooperation and understanding. People often find that the ways they connected with others in the past don’t work with their current partner(s). Stroking the back of another’s hand, for a personal example, can be sent as a reassuring gesture but provoke uneasy sensations in the recipient. A lot of affective labor goes into learning not just what to say in a relationship but how to convey those messages in a way that minimizes misreadings. It’s not a perfect system but one that is always in progress.

The same goes for critical work. While an essay or evocative object can appear as if by magic in a journal or an art gallery, so much work went into those works that may never be seen by others. Or, perhaps the creator(s) show the wiring and the personal touches, noting where they left rough edges or embodied their frustrations with the piece. It is the trial and error that imbues the collaborative effort of building a language of intimacy—or any other project—with meaning. To “fall back into the theory” isn’t to mask our mistakes under the auspices of the theoretical but to acknowledge that every part of our work builds upon itself.