When people think of cyborgs, they might immediately go to The Terminator, and when they think of techno accessories, maybe Geordi La Forge’s Visor. At any rate, it all seems far into the future, and really, not that attractive. However, a couple of techno accessories that may debut soon could change our relationship with technology. 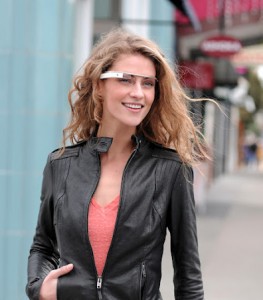 Google Glasses, being developed by Google’s X labs, are expected to debut in late 2012 or early 2013. Designed to look like a pair of Oakley Thump Sunglasses, this accessory definitely flirts with fashion. Projecting images and data directly onto the glasses as the user is wearing them, it is also at the cutting edge of Augmented Reality. According to the New York Times, these glasses will be powered by Google’s Android Operating System, and will not only include search and overlaid Google Maps data, but could also include games controlled by the wearer’s gestures. Seeing someone randomly flailing about in them might take away from the fashion aspect of this accessory. Also, these glasses are obviously not meant to be worn all the time, but as people are wont to do, some would end up driving in them. Would Google Glasses be safer than using a phone or map to find directions while driving?

Since this article was originally posted, Google has publicly announce the Google Glasses project, which they simply call “Project Glass,” and have released the below  video called “One Day” about what a day might be like using the Augmented Reality provided by wearing them. In addition to using the Google Maps feature, you would be able to text and video message, check the weather, take pictures, and check your calendar, using gesture and voice commands.   Google Glasses don’t seem to be more than a hands-free, wearable smartphone, which honestly reminds me of the AR version of the Bluetooth headset.   Instead of the rumored Oakley Sunglasses design, the announced look will be clear, but seems more  Geordi-esque than what I was expecting, and definitely remind me a little bit of a sci-fi cyborg.  According to Google, the project is still in the design phase, but they still expect to release it this year.  Do you think that this time next year, you will see people walking around with Google Glasses, talking to themselves?  Would you wear them? 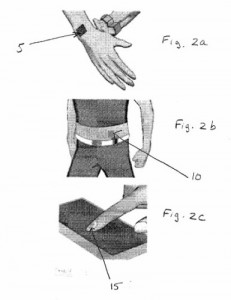 A vibrating tattoo that lets you know when your phone is ringing, you are getting a text, or if you battery is low sounds like a far-fetched idea, but Nokia recently filed a patent for technology that does just that. The tattoo would be made of magnetic ink that is demagnetized, tattooed into your skin, and then re-magnetized and programmed with bluetooth-like technology to communicate with your phone. According to TheWeek.com, “The tattoo will crackle with a tingling sensation, and you’ll have to scratch it to dismiss the call.” With this patent, Nokia is certainly venturing into undisputed cyborg territory, by suggesting we literally install the technology into our skin!  And talk about commitment! Offering a tattoo or other semi-permanent ink is certainly one way of getting customers to stick to a carrier, and cell phone type. Nokia has not mentioned how it plans to deal with reprogramming tattoos to communicate with phone upgrades. Would you get a phone tattoo, if it meant never losing your phone again?

These and other future accessories will draw the relationship between human and machine ever closer, fitting technology more seamlessly into our lives – with or without seams.  At what point do techno-accessores make us cyborg?

One Response to “Becoming Cyborg Through Techno Accessories?”