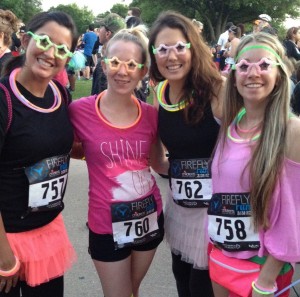 I ran the Firefly Run, a nighttime 5k where people dress up in illuminated clothes to run the race.  Some people (like me) simply wore glow-in-the dark accessories, but others went all out in full LED costume!

Seeing all of those illuminated outfits at varying stages of design and style got me thinking. At what point does illuminated clothing go from gimmick to costume to fashion?

Illuminated fashion is a high-tech style genre that has been around for years, but has yet to take hold in the mainstream, probably because it’s mostly  seen as impractical, and tends to fall into the “fashion of fashion’s sake” category.   And, just as with many other styles, it is very easy to get wrong.

Project Runway did an Illuminated Fashion challenge this season, and while the clothes ended up looking cool the illuminations served no function. I think FashioningTech’s post is spot on when it says that all of the designers missed the mark, and were stuck in a stereotypical mindframe. This is how most of the world sees “illuminated fashion,” and it is difficult to change paradigms and mind-frames. 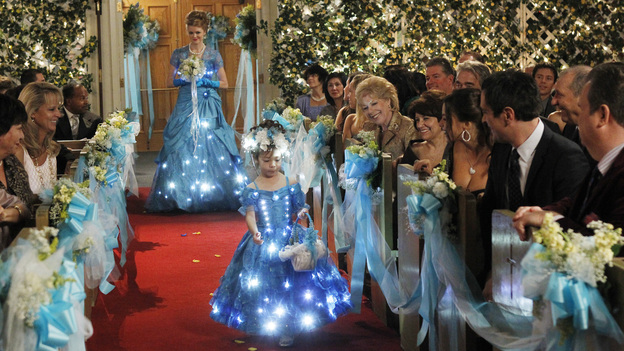 Illuminated fashion can be seen as an extreme or gimmicky, but can actually be found fairly easily and can look good in formal fashions. For example,  the bridesmaids and flower girl dresses in the wedding recently featured on Modern Family. In fact, you can actually custom order an illuminated wedding dress or a variety of other illuminated garments from  Enlighted.  Aside from the wedding dress, which I think turned out beautifully, although I would not have chosen yellow, Enlighted’s designs tend to fall more into the costume category, in my opinion. Part of the reason behind that, is probably their client-base, who seems to be Vegas-type shows, but I honestly think part of it is that Enlighted has been in the business for 14 years, and although on one hand, that is a good thing, meaning they have lots of experience, on the other hand, I think it is easy to get stuck in a style rut, and get stuck with one type of look.

CuteCircuit’s Aurora Dress,  covered in Swarovski Crystals and LEDs, was designed as a costume for an Opera. I think it’s gorgeous, even without the lights,  and could see it being worn to a formal occasion if it were not illuminated. With the illumination it could fall into the fashion for fashion’s sake/costume category, but I think overall CuteCircuit does a better job at treating illuminated fashions as actual fashions than Enlighted. Although both designers have dressed celebrities, Elighted seems to dress performers for the stage, and CuteCircuit dresses them for the red carpet. The difference can be seen in the language they use tp refer to their clothing for purchase on their websites – Enlighted offering custom designs, and CuteCircuit offering haute couture designs, in addition to their pret-a-porter collections.

Hussein Chalayan is an avant-garde designer and artist known for his marriage of technology and fashion. On the scale of fashion and art, he is even more over the top than CuteCircuit, having designed many of Lady Gaga’s looks, including the egg that she hatched from at the 2011 Grammys.   His 2007 animatronic dress line that automatically reconfigured, zipped and unzipped and  his 2008 lazer dress line both integrate technology into pieces that keep the high-fashion look without crossing over to cheesy, though I don’t think they can help but be gimmicky. This video showcases Chalayan’s animatronic line, and gives a little insight into how the pieces were created and his intentions for them.

Although he also has an online store, it does not sell any of his techno-fashions. In fact, in the above interview, he actually mentions that he would never dream of actually selling those types of pieces, which to me, indicates that he sees them more as more of an experiment or pieces of art, than actual clothing.

Until designers start to accept illuminated and animatronic fashions as more than just gimmicks or art statements, they may stay on the sidelines of fashion. Until then, I am working on my Firefly Run outfit for next year.

One Response to “When does Illuminated Clothing Become Fashion?”