For my wearable media object, I chose to create an LEDs-only circuit using the LilyPad Arduino Board. After attending Ettiquette Creative’s LilyPad Arduino Workshop, I had the resources and references to begin my project. I installed the Arduino software, checked the drivers, and referred to a tutorial provided on the SparkFun Electronics site to design my wearable media object.

In order to allow the light display to be the focus of the media object, I sewed the LilyPad Arduino to the inside of the purse. The majority of the stitches are also on the inside of the bag, and the cloth flowers hide the more noticeable threads visible on the outside. 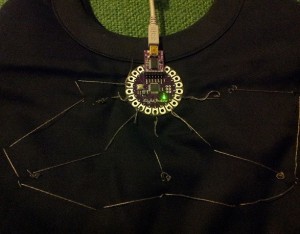 My goal with this project was to create a media object that could combine both style and technology. The outside of the purse has cloth flowers that camouflage the sewn-in LEDs. When the LilyPad Arduino is activated, the LEDs blink and fade in a random pattern. The soft blinking lights and smooth pattern are meant to tie back to the idea of flowers being delicate and graceful.

While I was working on my project, I wondered if there was a way to make the LEDs respond to the beat in music. I chose the track (in the video) with that in mind. I loved how the lights almost look like they’re dancing to the music. That might be something I’ll look into for a future LilyPad Arduino-related project.