When you think of the world of fashion – what comes to mind?  Glamorous? Exciting?  Very possible those words are just a couple that are used to describe the fashion industry; but have you stopped to think about the impact to the environment?  I would bet money that the same words would not be in the vocabulary of what I am about to  illustrate about the textile industry and the environment.

There are four key environmental impacts associated with textiles

From an environmental point of view, when thinking about the environmental hazards, the clothes we wear and the textiles they are made from can cause a large amount of harm. 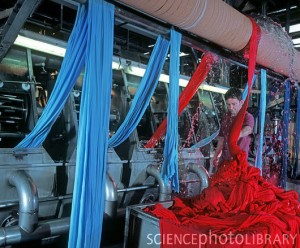 Dyeing alone can account for most of the water used in producing a garment; but there is also a considerable amount of water and energy that are used in the processing of the various materials in the textile production chain.  The textile dyeing and finishing mills use large volumes of water and substantial quantities of complex chemicals and are high producers of carbon dioxide emissions as well as water pollutions.  Unfixed dye tends to wash out of garments, and can end up in the rivers and sewers, as treatment plants fail to remove them from the water.

Water is not only used in large quantities during the dyeing process but is also used in considerable quantities for irrigation during the growing of natural fibers, depending on the localized rainfall patterns

Now – there are several challenges that companies have but one of the biggest is staying competitive.  On one hand, companies are looking for business improvements to keep costs to the consumer low but also an efficient way to keep the environment safe by adopting clean technology which in turn will produce eco-friendly products.

These issues are rising and more and more people are becoming aware of the impact on our environment.  The impact is causing a ton of concern to the companies and to the consumers alike.

Earlier this year, Ecouterre headlined a story about Nike partnering with a new company that was trying a new technology:

DyeCoo Textile Systems is a Netherlands-based company that built the first commercial waterless textile-dyeing machine. The H2O-free technology imbues a pressurized form of carbon dioxide with liquid-like properties, allowing it to penetrate textile fibers and disperse preloaded dyes without extra chemical agents. Once the dyeing cycle is complete, the CO2 is gasified to recover the excess dye before cycling back into the dyeing vessel for reuse—no muss, no fuss, and with far less energy than conventional methods.

Obviously, water is just one of the issues when it comes to textiles and the environment.  A few others to mention are things such as nylon taking approx 30-40 years to decompose or the use of harmful solvents in glues and chemicals that are released into the atmosphere affecting the quality of the air we breathe.

That leaves me with asking a powerful thought provoking question:  How can an industry that encourages rampant consumerism be environmentally sustainable?