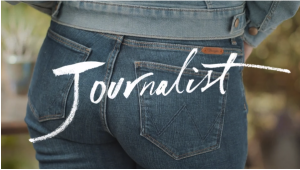 Still from Wrangler’s “more than a bum” ad

One of our Arts and Technology PhD students, James Martin, forwarded me this story in which the author, Maggie Parker, asks “Is this denim ad accidentally sexist?” In the email, the student asked me, “how do companies keep making the same mistakes?” The mistake in question is that Wrangler made an ad that attempts to position women as “more than a bum.” Instead of liberating women from the male gaze, however, they end up reinscribing the very thing they suggest that they are resisting.  From the opening shot that is focused on Kimbra from behind, to the series of shots like the one that I included above, to the lack of older or disabled bodies, to the normative depiction of femininity, I agree with Parker that it’s a #FAIL. They do deserve some credit for a few things: a racially diverse cast; not just including cis-gendered women; and including a few curvier bodies, even if they never show those bodies in jeans or from behind.1I admit that this may seems like a contradiction. I’m critiquing them for reducing some women to body parts, right? Yes. But also, I’m mad that they didn’t reduce these other women to body parts? Yes. I don’t want them to reduce anyone to body parts. But in the world in which they have already done this, and in which they do not show any but the smallest of women from behind, they are implicitly suggesting that other bodies are not desirable. So it makes a bad situation worse. For more analysis of the contradictions in the ad, check out Parker’s piece linked above. The rest of this post takes for granted that the ad is sexist and focuses on the question, “how do companies keep making the same mistakes?” James, the student who sent me the story, suggested in exasperated disbelief that perhaps Wrangler knew what they were doing and this is a misguided effort to get people talking, in keeping with the old adage, “there is no such thing as bad publicity.”
As entertaining as a good conspiracy theory might be, there is probably a more straightforward answer.
Let’s start with Wrangler. The company has a long history of cultivating a “cowboy” aesthetic. And though there are plenty of fierce cowgirls out there, many of whom I suspect love their Wranglers, normative masculinity is fundamental to the company’s identity. Wrangler does little to help themselves court serious cowgirls (let alone other women or gender non-conforming consumers). Women are not even mentioned in the company’s own history timeline until 2004 (http://www.wrangler.com/about/history.html).  The image slideshow that takes up the top 1/3 of their website heavily features men in active poses and out in natural settings. The only woman is not even shown wearing jeans. She is posed against a wooden backdrop, which possibly suggests a barn, but is definitely not the rugged outdoor setting of the other photos. She is pictured from the waist up, directly facing the camera. The images featuring men suggest that the camera is spying upon some moment in which the actors are caught unaware. In contrast, she is clearly smiling at the camera. Posed for a picture, she exists for the camera. Most puzzling of all is that instead of showcasing her in jeans, the slider image prominently features a pair of earrings and the text, “Go On, Accessorize,” with a link to “shop jewelry.”