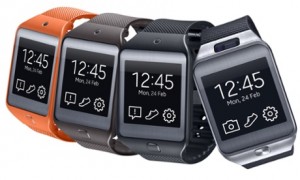 There’s a rumor out there that Apple is coming out with a watch, but Samsung has already beat Apple to the punch.  Samsung has released two updated versions of its Gear smartwatch featuring slimmer designs and heart rate sensors beating Apple to the release of a health-tracking smartwatch.  This is a major competitor to a possible iWatch and Nike’s (with iPhone assistant) Fuelband, This watch uses fitness tracking software and has the ability to play music using Bluetooth headphones without cables or cords to connect with your smartphone.

2012 and 2013 has been an interesting time period for the development of technology into fashion, specifically with the development of Google Glass. Although, outside of the sporting good market where else have we seen advances in technological fashion to your mass markets? At a whopping expected price point of $1,500 who exactly does Google think they are marketing to?

Currently Google has a lead in the advances toward incorporating “computers” into fashionable items in the accessory market. Apple has also been rumored to be coming out with iWatch which is again in the accessory market. We have yet to see advances in the Ready To Wear market outside of the health and fitness arena. Techno Fashion by Bradley Quinn was published in 2002 and references the i-Wear project which was a production of prototype garments. This project was experimenting with making clothing that used laptops, mobile devices, and batteries which we are just now starting to see with the development of these new “smart” fashion pieces.

“Our philosophy was to integrate very naturally the technology into the clothing. The i-Wear shouldn’t hinder people’s movements, it should be like normal clothing, but with many new options. It should be a second skin that feels what is going on inside the body and outside in the environment and takes action using that data.” De Brouwer (Quinn, p. 103)

So from 2002 to 2013 we haven’t made any leaps and bounds towards the mass market having access to this kind of “i-Wear” that De Brouwer and his team were working on for a span of five years but is Google Glass about to bridge this gap? Much like the Apple fanboys Google has a strong following and they may have the brand power and hype on their side to make this technological advance stick around. While they clearly are not at a point to bring the cost to a more consumer friendly place they sure do have enough hype around their product. Currently the product is in the hands of thousands of developers and will soon be out for an “everyday” consumer to purchase…of course an everyday consumer who has $1,500 lying around to purchase on a gadget that may or may not stick around.

The question that I would like to pose is, are we at a point were people are ready to rely less on their phone and more on an item of “fashion”? Phones over the past decade have taken a place in our society as a statement of wealth and also a fashion statement. We have come a long way from the brick phones from the 80’s to the newest iPhone 5’s sleek design. So many people base their status in society on what phone they carry that are we ready to make the jump to glasses or a watch that will make a phone almost useless besides for its original purpose, to make phone calls. It can be easily seen every time Apple comes out with a new iPhone that this piece of hardware is so extremely important that people will wait for days in line just to be the first to have one. It has yet to be seen how Google will market this item to the mass public but it will be interesting to see if your average customer will want to try them on.

In an article from Mashable.com they referenced an infographic from footwear retailer Brantano that seems to be quite useful in this discussion.