If you could protect yourself against cancer, would you? It turns out, in some instances, you can. END_OF_DOCUMENT_TOKEN_TO_BE_REPLACED

I have always have a fascination with the “space world”. Being a fashion student, I could only dream to be so  avant garde like Jean Paul Gautier in  his creations for the Fifth element. While working with LEDs this semester, I thought to myself wouldn’t it be cool to have tiny LEDs at the tip of your eyelashes.  It would be something you will see in a Sci-Fi movie. So I goggled to see if such a product exist. I came across Soomi Park’s video. Here, Park uses LED’s to emphasize on the size of the eye.  What was so cool about the technology part of the lashes is that they came with sensors. You can turn the lashes on and off by tilting your head. The video itself is kind of “spacey”. I didn’t even know that this existed.  I think the whole concept is cool but they are a little too bulky for me. They also come with added materials that are attached to your ear which maybe the sensors.  I could see this taking off for a while especially within the Music Video world. 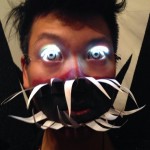 I came across another LED eyelash project pojken. This project was use for costuming.  Here the artist uses smaller LEDs. (SMDs). These were made to wear on the top of the eyelid. She also used soldering to help keep them together.   This started a journey for me  to see if what I wanted existed. I found a whole  eyelash design world. There are many different designs to artistically express yourself. I discovered that there are UV eyelashes in market now. 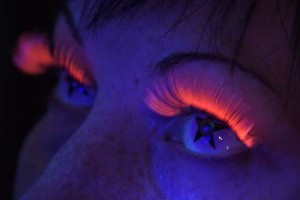 I would like to design or help to find LEDs small enough to put at the tip of eyelashes to where they would appear to be little drops of color liquid at the end of the eyelash. Technically I don’t think a LED exist that can be so small and then would the LEDs be on all the time. Is there a light sensor small enough to communicate to the LEDs when to shut down and when to come on? It would bring your eyes to a whole other level, when it comes to make-up and flirting, don’t you think?