Performance is a major theme in fashion. Whether it’s the performance an office, a gender, or otherwise, the things that we attach to our bodies can contribute to a character we want to project. Performance also goes further. On the runways, the haute couture assemblies of many designers are almost unwearable. They push the boundaries of fashion and oftentimes execute daring physics-defying forms. 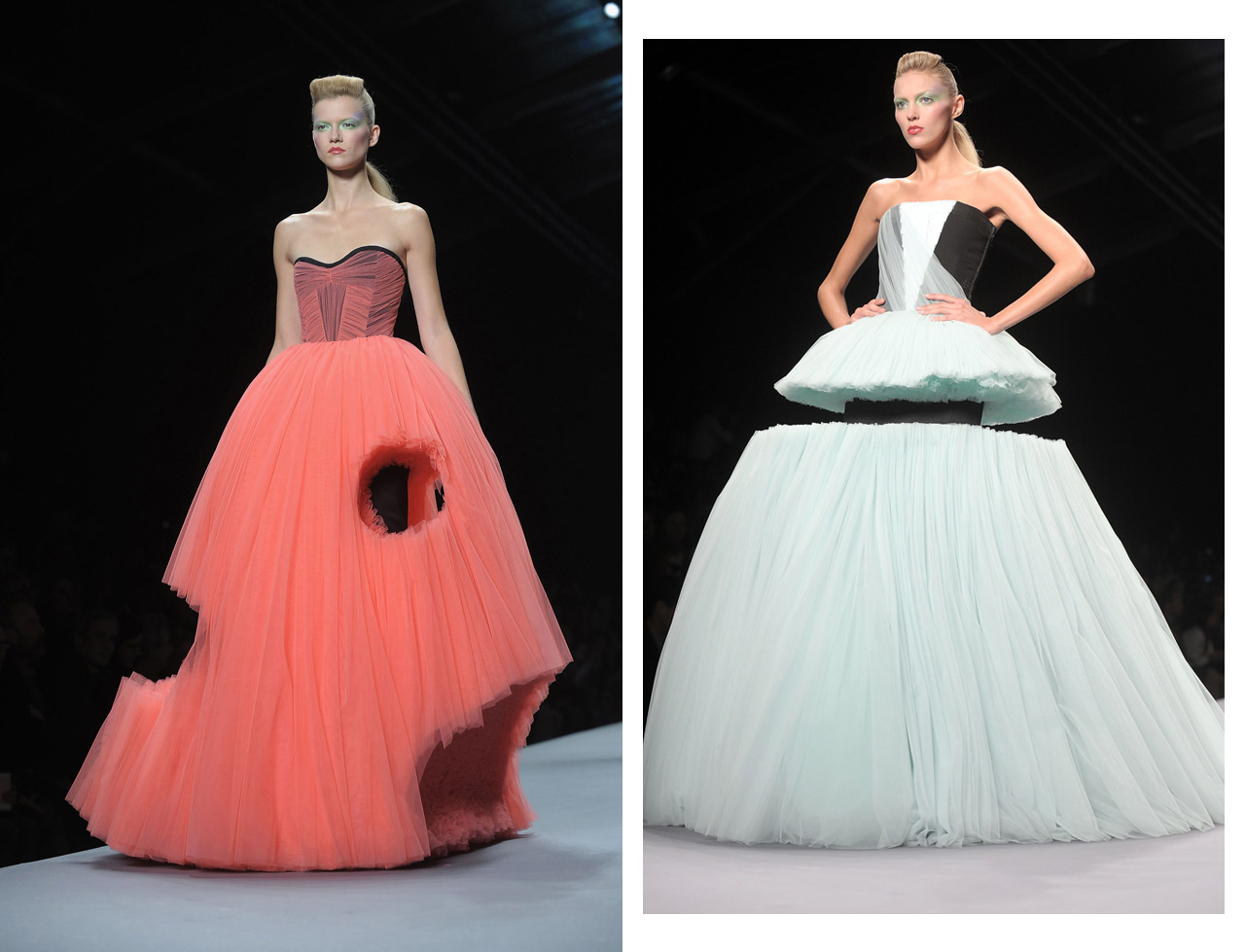 This second form of performance is what I took on in creating my project. I wanted to not only create something beautiful, but also something somewhat shocking. My vision is to create a piece that is more form than function, intended to awe. With this in mind, I conceived of the bird cage. It seemed achievable enough, but it was also a departure from much of the wearable technology explored in class. In contrast to the heavily automated and digital designs of many emerging media fashionistas, I wanted to create something passive (requiring no power source) that would have strong visual impact. The bird cage fit this bill: seeing people in cages is shocking and Faraday cages—structures with particular physical attributes—are passive shielding devices.

My goal was to create a structure that would passively neutralize cell phone communications while taking an anything-but-neutral stance on the issue of surveillance. I set out to create this oppositional attire using fairly few materials, but found that they would not necessarily have the desired impact. A couple of iterations of the design were constructed, each eliminating a few of the flaws from the last. My initial design required only copper wire to achieve the desired aesthetic, but after some research and rudimentary prototyping, I discovered that extra material (aluminum foil) would be required to manifest the bar shapes of the bird cage. 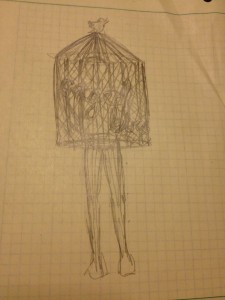 Haute couture is literally translated as “high sewing” or “high dressmaking.” It is often denoted by its one-of-a-kind nature and high quality due to its legacy of commission-based work. My attempt at creating this project certainly fulfills the criteria in terms of uniqueness, however quality is lacking. From the outset, I struggled to find an adequate workspace in which to assemble my creation. The process of moving pieces from place to place resulted in significant damage culminating with the most destructive of all, the night before my deadline, in which case I actually managed to trip over the wires, breaking the connections, damaging the frame, and more than bruising my psyche.

I learned a lot, however. (As one often will getting [literally] tangled up in the complex world of fabrication.) One of my most important lessons was in the perils of not having a consistent workspace. To anyone setting out to create a project that requires working with wire, I strongly recommend not moving your work until it is absolutely finished and sturdy. If I attempt to recreate (or rather, re-attempt) my design, I will also make some significant changes to the design.

My primary concern in early versions of the design was weight. After all, this is a wearable piece; it has to connect to a person’s body. Despite this, I’ve learned that it would be worth adding several ounces more material in order to make the product more robust. Although delicate, tissue-paper clothing is surely impressive, the work environment required to produce it is also much more limited. Next time, I will attempt heavier construction.

I also struggled with the shielding that I hoped to achieve. With a voltmeter, I could have checked for conductivity gaps, but (alas!) I did not. In a better version of my creation, I would solder the contact points to ensure both steadfastness and conductivity. Faraday cages are constructed of complete circuits. Only when the circuit is perfectly connected does the shielding effect come into play. Gaps create wide openings which can be perforated by undesirable wavelengths of EM radiation.

Ultimately, I gleaned a far greater appreciation for the tremendous runway pieces that artists churn out season after season. With several weeks of planning and construction, I struggled with only one piece. To imagine creating twenty, forty, or a hundred such designs is overwhelming. Although some say that the “design” label is inferior to the “art” label, it must surely be acknowledged that the design process of creating structural wearables is intensive.

For now, my life in revolt will hopefully be lived outside of the entanglements of wires (tapped or otherwise), but perhaps that’s wishful thinking. Expect an updated construction of this project in the future.