With the recent release of their hit Cider Cider, Japanese pop group Tempura Kidz erupted onto the international stage.  Full disclosure: I can’t speak Japanese.  Yet.  So for the purpose of this post I’m approaching Cider Cider from a purely aesthetic angle as it relates to fashion, technology, and subculture.

Kid-friendly monsters are nothing new and it’s easy to see how Sully and a couple other characters from Monsters Inc might have inspired some of the costume elements.  However, long before the Tempura Kidz, audiences watched a young Jennifer Connelly evade brilliant orange Fireys while they swapped body parts and sang David Bowie’s Chilly Down in Jim Henson’s Labyrinth.  Go back even further, and anyone under 50 probably learned their ABCs from the long-cherished cast of Sesame Street.

But what makes the Tempura Kidz different and signals a burgeoning subculture is that, instead of making friends with monsters, they’ve become the monsters.  Their costume headpiece proportions and face makeup draw subtle inspiration from Maurice Sendak’s classic Where the Wild Things Are.  Iridescent green and silver warts, as well as starkly contrasting mini poms, make up a dazzling array of warts.  Each skirt is a mad plume of colors, spectacularly resurrecting DayGlo in all its twentieth century glory.  And that’s before the lights go off. 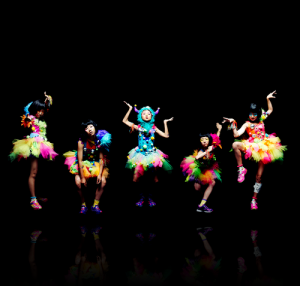 While I was a bit disappointed that it wasn’t directly incorporated into the fabric, the use of fluorescent lights are a critical element to the costumes.  Rather than being set against a black background, the parallel fluorescent bulbs give a kind of aesthetic order and continuity to the performance.  When the lights switch from unfiltered white fluorescent to ultraviolet we start to see that, far from being afraid of it, darkness is their territory.  Look closer and you’ll even notice that the bandaids adorning their noses and knees are glowing, as though bumps and bruises inherent in childhood have transformed into decorations.

If you’re already familiar with some of the finer points of Japanese fashion for young people you may be able to guess where I’m going with this final bit.  Drawing from a long tradition of theatrics and gender play, I can tell you one of the Tempura Kidz is not like the others.  Monster subculture not only makes the night claimable territory for girls, it also makes a dress a safe place for a boy.  You can google it if you really want to know which one.  Or you can just hit replay, and agree that they’re all monsters, together. 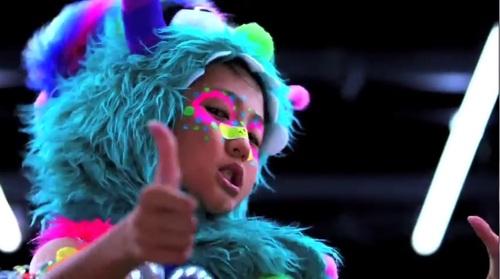 One Response to “Monster Subculture for Kids”