The original idea of this wearable project was to create something unique to writers; something that would allow them to benefit and help push their passion. Many writers – myself included – have difficulty keeping track of our word count. See, writers usually want to hit a certain amount of words by the end of the day (for me, it’s usually around 2000 minimum). But school and work and easily get in the way of such things, and after a long day, and especially after hitting a lot of “writer’s block,” keeping up with the target word count can be a huge issue, and one that looms over the head of every writer.

The idea behind this shirt is simple: force writer’s to display their current word count and compare it to their projected word count. I wanted to accomplish this by placing a screen on a t-shirt and have the current and projected word counts displayed so that everyone, the writer included, would have to see (constant reminder!). Essentially, I got a simple t-shirt, an LCD screen and a USB adapter to complete the project. The LCD screen came with a kit, which had components that needed to be soldered together and wires that, again, needed to be soldered in order for the screen to work. The USB adapter would have to be soldered on afterward, as an extra component. (I needed the USB so I could plug the screen into my laptop to code the word count stuff).

Let me go on the record and say that soldering is not in my skill-set, by any stretch of the imagination. I had to watch some tutorial videos and check out some “how to” sites in order to get the process down. (The first few initial tries at soldering ended in failure…). Eventually, I soldered all of the components together, but I ran into a big problem. The instructions on the SparkFun site – which were terrible, by the way – did not mention a power source. They simply stated that one was needed, or that the screen should be connected to a computer. I have a computer, so that solves it, right? Not exactly. In order for the screen to receive energy from the computer, two wires needed to be soldered to the main board. They needed to be in two very specific holes… The problem being that there were TWO of these two very specific holes. And the site did not specify which to utilize. So yeah, I had to guess.

The next issue came when trying to solder the USB adapter. The adapter needed to be connected to “headers,” which had to be soldered to the main board. I soldered the headers without too much trouble, and decided it was time to move toward coding. The coding itself was not too much of an issue. Just some trial and error. But before I could test the code to see if the screen would work and actually run the code, I made a critical error. I accidentally broke the headers that were attached to the USB adapter. Harrison supplied me with some last-minute headers, but ultimately, they did not work.

Also, just a small side note, sewing is not in my skill set either. Sewing the screen to the shirt was, well, lackluster. And I did not take into consideration the weight of the screen. It really weighs down the shirt, making it very uncomfortable to wear.

Ultimately, I put in the effort, but made some serious mistakes along the way, causing me to make a very… interesting, non-functioning t-shirt. Maybe I could re-visit this, with a new screen, and make it work. 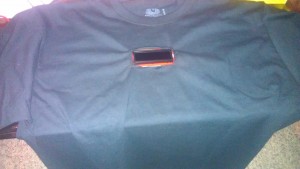