As the wearable tech world grows exponentially under the radar of the public, there is beginning to be a reoccurring theme. Although others have found their base in headware or belt clips, most of the new tech coming out, it seems, is to be worn on the wrist.  Whether the device is for fitness, for time, or a combination of things, why are we only looking to this area of the body.

This was apparently questioned as well by the creators of the HeadWatch.  Expected to come to market sometime in 2015, the headset- watch combo seems to be a bridge between humans and tech that makes use of more than just the wrist. essentially, the device is an interactive bluetooth headset that functions as a controller for your smartphone, notifying you of incoming calls or texts, keeping the time handy, and functioning as a Bluetooth headset that is removed from the holder on the wrist and slid over the ear. 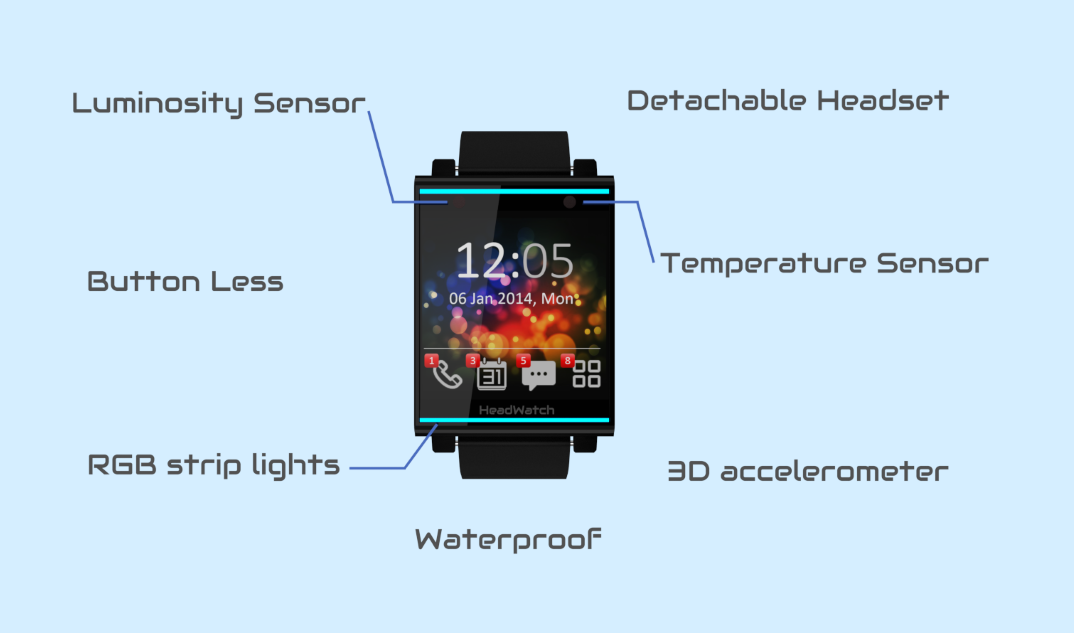 A more in-depth description as well as examples of usage can be viewed on the official site.
To support the cause and help fund this project, or maybe even roll your sleeves up to be a beta tester, visit their campaign page.

Another product straying from the wrist craze is a spy necktie made by Thanko.

Retailing at $128.00 USD, the necktie features a small hidden camera to record with as well as a remote to activate the recording. For storage thereis 4gb of space available that can be used as a USB flash drive for transfer of the recordings. Because of its out of country status, you may need to visit here to learn more.

Despite not making it to the market, Huggies expanded into the wearable tech world just last year without the use of the wrist. The The Huggies Pregnancy Belt was made to allow soon-to-be fathers to feel their child’s kick just as the with-child mother can.  Initially used just for marketing, Huggies representatives said that they were “evaluating their options,” at the time.

Figure 3. The Pregnancy Belt for Him and Her [Respectively]

There is little information on the outcome or final decision of this device but it goes to show that there is plenty more to wearable tech than just what can fit around your wrist.