The Sync shirt is designed to amplify the VJ’s presence on stage as he/she performs for the crowd. The shirt rhythmically pluses with the beat of the songs, drawing attention to the VJ. Sync enables the performer a greater range of self-expression through the display on the entertainer’s clothing, thereby bringing more of the artist’s persona out in the piece. As Bradley Quinn states, “cyberspace, as a realm of intersecting practices, presents designers with a forum where fashion can be represented digitally or shown on an interactive platform”.  The Sync bridges the gap between performance, fashion, and interactivity. 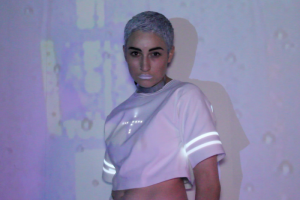 By making the Sync a piece of clothing, the creator uses the world of fashion to make a statement about music. Music is in a state of constant flux and, as each piece of music is played, so is the Sync. As the shirt flashes rhythmically with the music, the performer becomes a musical means by which to analyze fashion. Simultaneously, the Sync acts as an instrument in the analysis of music by displaying the rhythmic characteristics on the front of the shirt.

Aspects of interactivity with the shirt allow the VJ to fold the Sync into the performance, by choosing various beats to affect the image on the shirt. The performer’s interactivity with the audience is assisted by the Sync and the rhythmic flashing that draws attention to the VJ. The aspects of creativity and interaction bring this shirt into the realm of digital art as the mixture of many art forms to express the self in a unique way.

Originality of expression seems to be something that is becoming ever more elusive, so digital and wearable technologies have become the new way to express one’s self. Sync becomes a format for the expression of the self within the mediums of music, fashion, and digital technologies. It creates self-expression by making and placing the individual into the roles of performer, creator, and inventor. Therefore, Sync becomes a representation of the power of creation and performance.

The use of technology and fashion coordinated in the Sync allow the wearer to perform his or her art while being part of that art themselves. It not only allows the videos displayed to communicate a message, but the VJ, and more particularly the VJ’s clothing convey a message as well. The sensors within the shirt are programmed to flash with the music, thereby coalescing the display and the performer.