Tyranny of the Arbitrary

This project aims to recreate a simplistic version of a fitness tracker. Instead of being made for humans, however, this device is designed to be worn by a dog. The garment is a collar made from fabric and garment interfacing. The collar is constructed in such a way that two the two pieces of fabric are sewn along one of the long edges and can open like a book. The LilyPad and accelerometer are sewn to the inside of the “book” and are connected via conductive thread. When worn, the top flap is folded over the electronics, and snaps to the other piece of fabric to provide protection. In order to record the data collected from the accelerometer, a Sparkfun OpenLog with a micro SD card attach to the FTDI connector. Data is stored on the SD card as a text file. At least this is how the hardware setup is supposed to work. There were some problems recording data to the OpenLog. Sparkfun customer support was not able to help me resolve the issue. Sparkfun was kind enough to test another OpenLog and sent it to me. However, I was unable to record data with this hardware as well. As such, the LilyPad was connected to a computer via the USB cable. Data in the serial monitor was copied to a text file. 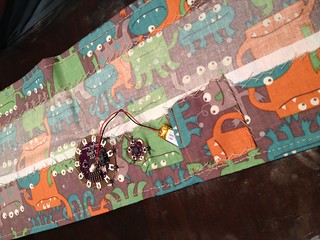 This project uses a combination of Arduino and Processing. Arduino is used to control the electronics, while Processing is used to manipulate the data collected. The Arduino sketch reads the X and Y data from the accelerometer and stores them in variables. A fraction of a second later, it reads new X and Y data and stores them in another set of variables. If the absolute change in X or Y is greater than a threshold, then the data is logged on the SD card. When the data collection phase is complete, then the information from the SD card is inputted into Processing. This program the test file and puts each number into an array. Once in an array, the program creates an image composed of overlapping transparent rectangles with heights and widths that correspond to the X and Y data. 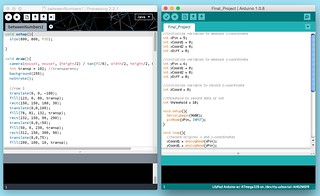 Professor Samantha Brennan, in her essay Fashion and Sexual Identity, or Why Recognition Matters, talks of individuals employing visual signs to affirm their identity within a particular community. She calls this recognition. More importantly, she demonstrates how recognition depends upon power, appearance, and context. To render this more concrete, Brennan uses the leather community as an example. Within this particular group, wearing a colored hanky in a particular pocket carries meaning with respect to an individual’s sexual preferences. This is called flagging. Outside of the leather community, a hanky in a pocket is no longer flagging, it is just a hanky in a pocket. Similarly, individuals cannot simply create their own, new hanky code. Meaning for flagging comes from general acceptance from the larger community.

To restate the aforementioned idea in the words of Saussure, fashion in general and flagging in particular are a type of sign, and are thus composed of two parts. The colored hanky in the pocket is the signifier, and the implied sexual preferences of the individual are the signified. The relation between the signifier and the signified does not come from a preordained authority; rather, signs are dependent upon their context. They are mutable. In the end, regardless of community consent, signs are arbitrary. Brennan notes the political and moral reasons for visibility. Unfortunately, the arbitrary nature of signs works against this. Not all people understand meaning in a canonical way. Even if this were to come true, signs change over time, and there would be another re-learning period. Brennan laments this problem, “I continue to struggle with visibility and the burden of explanation. I do not expect these issues to go away anytime soon.” 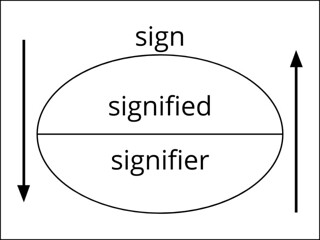 There is a tyranny of the arbitrary. It rules in a capricious manner. In the case of fashion and sexual identity, the arbitrary nature of the sign inhibits visibility and acceptance. But there is another aspect to the tyranny of the arbitrary; what is arbitrary can be misconstrued as rational. This legitimizes the tyranny as an undisputable fact. A current example of this is the rise of wearable fitness and the idea of the quantified self.  Fitness trackers collect data on the number of steps taken, food consumed, the quality of an individual’s sleep, and the like. Accompanying websites sort and combine the data to give users complete picture of who they are.

The goal of the data collection is to map the user’s daily actions onto a visual representation that is easily understood. People can see where they excel and where they need improvement. Users set goals for themselves, and built-in social features use friends to apply positive reinforcement to set new personal records for the data collected. Getting more sleep, being more active, and eating right will undoubtedly lead to happier, healthier individuals. When this idea is expanded beyond the individual, there will be large groups of people leading healthier lives. This could mean fewer cases of diabetes, heart disease, and other ailments that tax the nation’s already expensive healthcare system.  Without question, fitness trackers have a noble goal, but it is not one without limitations.

On a micro level, there are some arbitrary aspects to this model. The fitness service suggest goals for new users. The developers base these goals on an activity level the user selects. Without a full medical history, however, these goals are only a best guess. What if the user has a pulled muscle, bad bad, or balky knee? Then there is the fact that Nike’s FuelBand uses something called NikeFuel as the main metric for the service. Nike describes this metric thusly, “NikeFuel measures your whole body movement focusing on the energy required to do an activity. NikeFuel is calculated for the same way for everyone, it doesn’t take into account body weight, gender or age.” By explicitly claiming NikeFuel exists independent of the particular nature of the user, Nike acknowledges the arbitrary nature of their product.

On a macro level, individuals who strive to lead happier and healthier lives could have a significant impact on the future of the nation’s healthcare system. A drastic reduction in those chronic conditions that require continual and expensive care will save the country an immense sum of money. This would help solve the problem of making healthcare affordable and available to all that need it. The problem is that an individual’s contribution to society goes beyond steps taken and dollars saved. Imagine wearable technology that encouraged individuals to be more compassionate and empathetic. It is these characteristics, the ones that escape easy quantification, that truly define who an individual is. Product like the JawBone Up promise to help create a better you, but a better you goes beyond what can be measured by a device on a wrist. The decision to track step, calories, and sleep and present this as representative of an individual is arbitrary. Moreover, fitness tracking companies present their data in such a way that gives the impression of being a complete picture.

The goal of this project is to show what happens when we change this point of view. The program that visualized the data collected from the dog collar does so in such a way that the rectangles’ position all vary upon the z-axis. From a head-on point of view, the data has a unified appearance. It is a series of overlapping rectangles. Though it may not be as instructive as the charts and graphs of fitness trackers, its abstract nature does not belie the undivided nature of the data. However, when a user changes the mouse position, the point of view changes as well. Here, the user can see the gaps and holes along the z-axis. The data loses its cohesive characteristic. The arbitrary becomes apparent. The precision of the fitness tracker and the authority of the charts and graphs fail to capture who an individual truly is. Their point of view is arbitrary, but is presented as complete. Without changing the vantage point, the arbitrary appears logical, and individuals run the risk of being blinded as to who they really are.