My project is a gamer shirt purchased in the boy’s section of a clothing store (since there were none in the girl’s section) in which I was to place an LED matrix that would display feminine images and print the word girl. That was the plan, at least. Then reality hit.I went through a process of researching, purchasing, assembling, and coding several LED matrixes, all with unsatisfactory results.  Finally, I switched to an LED cord on the outside of the shirt, rather than the inside, and I have had to use a 12-volt plug-in to make it work.

In her work, “Fashion and Sexual Identity”, Samantha Brennan states, “heterosexuality is a position that is so unremarkable among heterosexuals that it becomes invisible as a structure”. The same holds true in gamer fashion. Masculinity is the norm and femininity is the other, rendering the feminine invisible. Thus, bright flashing LED seems like a good way to become visible.

The amount of knowledge I have gained from the process is incredible. I began this semester with no experience in sewing, coding, or soldering. Now I feel like I have a beginner’s level skill in all three. I honestly enjoy making and maker culture. There is such a wide variety of ideas out there and so many things that can be done and created. I’m sure that I will continue to develop the skills that I have learned in this class and apply them to future endeavors.  It was the experience of making that taught me the most about maker culture and how to develop wearable technology. I was able to watch videos on soldering and apply those skills quickly. Ultimately, for my actual finished project, the sewing skills proved to be the most valuable, as hand stitching the LED wire into the shirt was required. 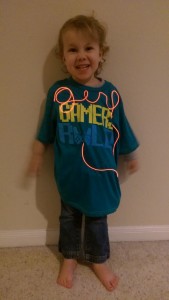 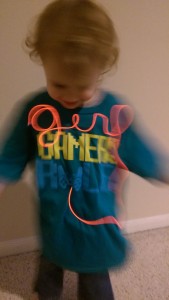