Remember when you would watch a music video, lust after the clothes you’d seen, and then scour the internet searching for similar threads? Gone are those days! Ssense, an online clothing retailer, has styled the “World’s First Interactive Shoppable Music Video.”

The music video “I Think She Ready” features duo FKi, rapper Iggy Azalea, and Grammy-nominated producer Diplo, and they are all styled by Ssense. The video uses interactive hotspot technology to allow fans to view and shop for every item that is seen in the video. During the music video, white square icons with the letter “S” pop up on the screen. Rolling over the icon will expand the “S” to “SHOP THIS LOOK”. Clicking on those icons will take you to a screen that shows each of the products worn in the selected shot. Each article of clothing links to the Ssense product page where the item can be viewed and added to a cart for purchase. 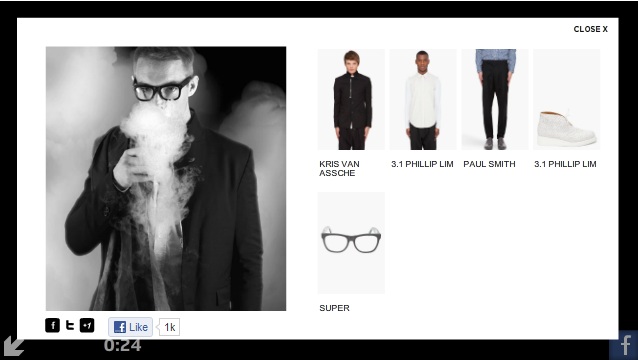 Even though the white icons only appear sporadically throughout the video, do we really want music videos to display these distracting icons each time we watch them? If this trend catches on (and I think it will), perhaps the icons will become smaller or less intrusive in future music videos.

Fashion is used heavily and to great effect in music videos. Outfits ranging from the most mundane to the most outrageous have a chance to be featured by recording artists. The fashion seen in music videos can cater to any and all tastes. The ability to purchase articles of clothing while you are watching the video accelerates the decision-making process of consumers. If a viewer has to take the time to find the clothes on their own or has to remember what exactly was in the video, there’s less of a chance that those items will be viewed let alone purchased by those viewers. Being able to shop for the look right at the moment you are most interested in the clothes means that there is a higher probability that you will purchase those items.

While some music videos have been produced as artistic short films, a number of them have become glorified advertisements. They advertise the singer, the clothes, the location, and create an enviable style using all of these elements. Music videos are ripe for fashion and commerce. They are viewed multiple times, and they are easily distributed across the world.

However, there is a strong possibility that fashion will begin to play a more vital role in the video than the music itself. Will the message of a recording artist’s song be overshadowed by the endorsement of the products he or she is wearing in their video? Some might argue that we are already at that point in culture. In late 2009, Lady Gaga’s music video for Bad Romance showcased looks from Alexander McQueen’s newest collection including the jaw-dropping armadillo stilettos. To be honest, I heard about McQueen’s designs being featured in her music video before I actually watched it. The clothes were so fascinating that I paid less attention to the lyrics of the song which in fact do include the word “fashion”!

Films and television shows have likewise started to embrace the role that fashion plays in creating characters and settings. A number of television shows already offer easy access to the songs that are featured in each episode. Interactive television shows that allow fans to purchase their favorite clothes from the show as they are watching it is very likely imminent.

One Response to “Interactive Music Video: Shop While You Watch”