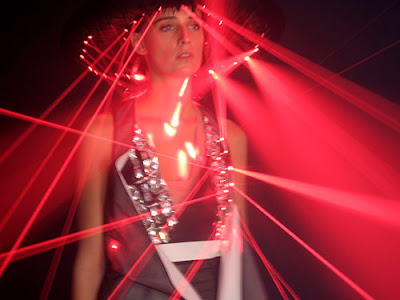 The word “cyborg” likely conjures all sorts of dystopian imagery to mind. I know when I hear it I think of Arnold Schwarzenegger in a high tech costume with guns blazing, relentlessly blasting away at Sarah Conner. That’s probably the image that most folks think of actually. However is that what a real cyborg actually looks like in real life? Yes, I did write “real cyborg” and “real life.” Most people don’t realize this but there are real live cyborgs walking around every day right here in the year 2012. What’s more, they’ve been here, on this planet I mean, for as long as everyone else has and you probably even know quite a few of them. In fact, I am a cyborg myself.

No, I haven’t taken leave of my senses. I am, however, employing a working definition of the term “cyborg” that is likely a lot more inclusive than most folks realize. A cyborg is a human being whose regular human faculties are augmented by mechanical means.  Any faculties, and any mechanical means. Hence anyone who wears prescription eyeglasses, like me, or braces, or orthopedic shoes, or Spanx, or support pantyhose, or anything that actually supplements the normal functioning of their physical person, is actually a cyborg. Surprised?

Now it may also come as a surprise that idea of the cyborg is not an entirely new one in the realm of fashion. In fact fashion designers have long flirted with the idea of the cyborg in conceptual  designs. By conceptual I am no longer referring to everyday supportive accutrements like eyeglasses and braces, but actual garments of clothing that move, transform, reconfigure, light up, and communicate, all via digital means. Designer Hussein Chalayan is one such designer who has been been on the forefront of this particular genre of fashion, known as techno-fashion, for many years. Chalayan’s designs, beginning with his remote control dress circa 2000, are famous in the fashion industry for literally “doing” things like transforming on his models as they walk the runway. Take a look at these “Transformer” dresses from Chalayan’s Fall 2007 show.

Chalayan, who is perhaps most famous for his remote control dress, frequently explores the convergence of fashion and art with his digitized conceptual designs. Chalayan’s designs, like the Transformer dress above, or his aforementioned remote control dress, blur the line between reality and fantasy by mixing heretofore disparate aesthetic elements. Here is a short film directed by Chalayan, showcasing his 2011 Floating dress which featured winged, flying, Swarovski crystals able to detach themselves from a rigid and free floating garment, and fly about seemingly completely of their own accord. Warning, NSFW.

Though perhaps the most famous, Chalayan isn’t the only designer exploring the convergence of art and fashion with digitized designs. Check out this beautiful and ethereal Aurora dress by Cute Circuit so named for its inspiration, the Aurora Borealis.

Originally designed for an opera performance the Aurora dress features “hundreds of Swarovski crystals and thousands of LEDs.” Here it is on a human model. Notice how the features of the model recede into complete invisibility and it is the dress alone that is visible to the observer.

Not all techno-fashion, however, resides in the realm of fantasy. Chalayan himself identifies four essential categories of cyborg or technofashion:

2. Normalizing- Establishing the technologized body as a normal form.

3. Reconfiguring- Equipping the body with extra functions such as by adding extra limbs or communications systems.

The aforementioned eyeglasses and support hose are perhaps the most familiar examples of items in the first category. However there are scholars and manufacturers currently  producing technofashion that go far beyond the restorative, and also leave behind both the familiar and the analog. Take a look at these energy harvesting smart textiles currently in development at UC  Berkley and Stanford.
[youtube]http://www.youtube.com/watch?v=F0ck2Qynjrc[/youtube]
Also, Nike has recently released the Fuelband, an interactive bracelet designed to track the fitness activity of the “everyday athelete.” Read: couch potato.
[youtube]http://www.youtube.com/watch?v=dG0vLFFtZDs[/youtube]
Perhaps not surprisingly all of this technological innovation has spawned a considerable amount of hand wringing. We are all familiar with the age old fear of being overtaken by our own technonologies. In fact there is an entire film genre exclusively devoted to the cinematic exploration of that seemingly universal anxiety. These anxieties are hardly new. Plato’s wariness of the cutting edge technology known as the written word dates back to  370 B.C.

“Therefore every man of worth, when dealing with matters of worth, will be far from exposing them to ill feeling and misunderstanding among men by committing them to writing.  Plato, The Seventh Letter, 360 B.C .

“He would be a very simple person, and quite a stranger to the oracles of Thamus or Ammon, who should leave in writing or receive in writing any art under the idea that the written word would be intelligible or certain; or who deemed that writing was at all better than knowledge and recollection of the same matters? Plato, Phaedrus, 370 B.C.

“I cannot help feeling, Phaedrus, that writing is unfortunately like painting; for the creations of the painter have the attitude of life, and yet if you ask them a question they preserve a solemn silence. And the same may be said of speeches. You would imagine that they had intelligence, but if you want to know anything and put a question to one of them, the speaker always gives one unvarying answer. And when they have been once written down they are tumbled about anywhere among those who may or may not understand them, and know not to whom they should reply, to whom not: and, if they are maltreated or abused, they have no parent to protect them; and they cannot protect or defend themselves. ” Plato, Phaedrus, 370 B.C.

Reality, however, perhaps along with the limitations of commercial enterprise, usually leaves us with innovations that fall far short of the ability to literally take over our lives, or rule our persons. Technological determinism, in all of its anxious iterations, fails to account for human agency, the real driver of innovation. If our garments can be designed to augment our bodies it cannot be ignored that said design, even at its digitized best, is no more than an imitation or extension of humanity. Techno-fashion, even fashion that restores, normalizes, reconfigures or enhances does so at the service of a human actor. Hence despite the existence of garments that can and do literally transform before our very eyes, or supplement the functioning of our bodies, we don’t actually live in the Matrix. But don’t listen to me. I am a cyborg, after all.