These past few weeks, while surfing the web, I found a couple of interesting things regarding the objetification of women. The first one was this video, called Killing Us Softly. Yes, it’s old, it dates back from 1999, but even 10 years later these statements are valid. The speaker talks a lot about fashion ads, and about many of the topics we have argued about in this class. My favorite part is when she compares the ads with women to a Calvin Klein ad where a man’s body is objectified (Around min. 11:00). Clearly in the video the main difference between both is that the ads that objectify women tend to crush our self-esteem in order to convince us to buy the product, while the one the objectifies the male body simply don’t.

On a different (but not so much) note, recently Dr. Pepper launched a new 10 calorie drinked aimed to men. To know that it was aimed at men I did not have to read their marketing plan. The ad says: “It’s not for women”. The TV commercial states “Hey ladies. Enjoying the film? Of course not. Because this is our movie and this is our soda, you can keep the romantic comedies and lady drinks. We’re good.” 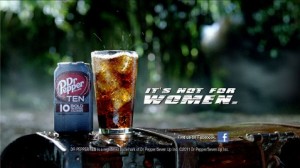 Of course, the ad jokingly uses stereotypes of women to make men feel more “macho”, but isn’t it a little bit sexist? I don’t see a lot of ads targeted to women that say “Hey guys, enjoying the film? Of course not, because this is our movie. You can keep your beer and poker games, we’re good”. Do women need to be diminished for men to few powerful?

So apparently, our image on advertising now still comes up as “not good enough”. Not even for certain drinks, because you have to be a guy to enjoy it.

But it’s not only ads, as we have been noticing. This article written for the New Yorker by Mindy Kalling, one of the writers for The Office, talks about how romantic comedies, films targeted mainly to women, only represent females that do not exist in real life. A couple of examples:

When a beautiful actress is cast in a movie, executives rack their brains to find some kind of flaw in the character she plays that will still allow her to be palatable. She can’t be overweight or not perfect-looking, because who would pay to see that? A female who is not one hundred per cent perfect-looking in every way? You might as well film a dead squid decaying on a beach somewhere for two hours.

So they make her a Klutz.

The smart and funny writer Nathan Rabin coined the term Manic Pixie Dream Girl to describe this archetype after seeing Kirsten Dunst in the movie “Elizabethtown.” This girl can’t be pinned down and may or may not show up when you make concrete plans with her. She wears gauzy blouses and braids. She likes to dance in the rain and she weeps uncontrollably if she sees a sign for a missing dog or cat. She might spin a globe, place her finger on a random spot, and decide to move there. The Ethereal Weirdo appears a lot in movies, but nowhere else. If she were from real life, people would think she was a homeless woman and would cross the street to avoid her.”

So yes, no matter how many ad campaigns try to focus on real beauty now (and I can only think of the one from Dove), we are still surrounded by unattainable images that are sold as attainable. That video from 1999 does not seem so old now, does it?

One Response to “Women and ads”