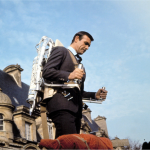 Jetpacks. Not only cool, but also an originally sci-fi concept that actually exists. The word normally invokes visions of adventurous self-propelled flyers, like in the 1965 James Bond feature film Thunderball. “What goes up must come down,” is an applicable cliché. Functional jetpacks average a flight time of about 20 seconds, but what if flight wasn’t the point? If the cliché read, “What goes forward must go forward faster,” how would that affect this wearable device concept? END_OF_DOCUMENT_TOKEN_TO_BE_REPLACED