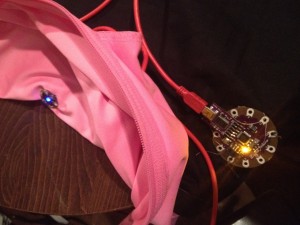 My project in essence was to make a wearable fashion technology that addressed the issue of gender identity by attempting to break gender roles. I believe the project was successful in doing this and raised a number of issues. END_OF_DOCUMENT_TOKEN_TO_BE_REPLACED

The Metamorphosis line from Younghui Kim is a clothing line that detects alcohol levels in its wearers. A female dress responds to the wearer’s level of alcohol consumption through the use of colorful lights and expanding sleeves, while a male’s blazer responds by an expanding collar that slides out to cover the wearer’s face. END_OF_DOCUMENT_TOKEN_TO_BE_REPLACED

END_OF_DOCUMENT_TOKEN_TO_BE_REPLACED

ALL of the terms above are alternative names with the same basic meaning.  Yes – men are beginning to wear the same fashions as women.  For years, women have been able to wear men’s fashion – so why not the reverse?  You might think that most men don’t know much about fashion but they are definitely interested and learning.

Some may find that some women’s clothing is more comfortable than men’s and for some the exact opposite might also be the case.  For instance some women might often buy men’s clothes because of style, fit and cost.  Others buy socks and shoes, because their feet are larger than what typical women’s fashion dictates.

Yet others find quite functional reasons for “cross dressing”.  Army men have been known to wear pantyhose (socks) inside their combat boots for long distances.  They wear them inside of their socks next to their skin – as they are great for preventing blisters!  Above is just one of the practical reasons that men wear women’s fashion.   It is only later when they discover that they are actually comfortable and don’t look all that bad that they start wearing more often.

This brings us to the term mantyhose.  Mantyhose is a term that was brought about 3 plus years ago.  Some might say that “shapewear” is inherently unmanly. That’s only because society’s minds are trained to pair tights with women’s wear.  Some believe it would only be accepted if you were competing in a sport that would enhance your performance.  Recently though, it has been noticed that it is possible to have a very masculine look when mantyhose are paired with other regular clothes. 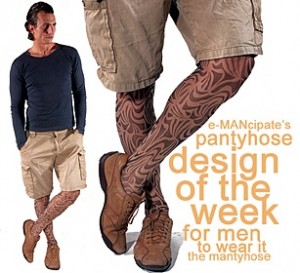 Lil Wayne jumped around in skinny women’s pants during his performance at this year’s MTV Video Music Awards. Kanye West wore a multiprint shirt designed for women at the Coachella music festival. Kid Cudi has been seen in a plaid skirt, Snoop Dogg often wears jewelry designed for women, and Pharrell Williams is a fan of the Hermes-made Birkin bag, the ultra-expensive purse favored by Hollywood’s top actresses.

Over the last 50 to 100 plus years, women have fought for equal opportunities in the workplace.  Now we see men fighting for equal rights on the style side.  For a long time, women have had the physical benefits of such things such as make-up and spanx  (the best thing since sliced bread in my personal opinion) while men have had to face the reality of what you have is what you got.   They have no way to cover a blemish.  That old saying of a “beer gut” is the excuse for having a gut… but what are your options if you are SHORT?  What do you do?  Well believe it or not, heels are becoming an option.  Yes – men in heels!  The picture below shows Lenny Kravitz even wore platform wedge boots to Fashion Week in New York. 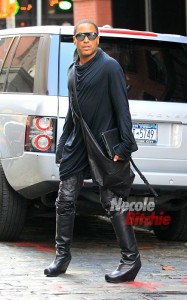 When it comes to clothing at least, women can do pretty much anything and can be accepted. Do men have the same equal rights as women when it comes to choice of clothing or do they fear mockery if stepping outside of who society says can wear what?

H/T to the Craftzine blog

This is a teaser trailer for a new song from the Japanese pop group, Perfume.

I agree with Brooklynn at Craft. This color changing dress is indeed cool. As is the song. What I find most interesting, however, is that the dress is placed on bodies that are robotic and puppet-like. So far the characters are shown in fairly passive positions, not doing much more than the Geminoid-F mannequin android about which Janet M. blogged last month.

It is unclear whether there will be a longer video released with the song. From this brief teaser it would seem that the portrayal of cyborg-femininity is one that is passive and devoid of power. The beats are played out in luminescence across a body that cannot even meet the gaze of the camera.

Can’t we do better than fantasies of pretty, puppet-like women in flashing dresses? To what end should a dress blink? And how can we leverage the electrified garment to challenge mainstream representations of passive femininity?

Cross-posted at The Spiral Dance.

As a result of this project, I have been thinking a lot about fashion magazines, including men’s magazines. So when someone on Facebook shared this video, it immediately caught my eye. It is a GQ.com post about Ken Jeong photobombing Kate Upton. Before I’ve even had my morning coffee, I find myself contemplating raced and aged bodies, the artificiality of photoshoots, and all sorts of other things.

Jeong is clearly leading us on, asking us to believe that he was not invited. In fact, the multiple takes of his jump into the pool, wearing different shorts each time, suggest that the folks at GQ are having a laugh.

But what is it about the video that makes it funny? Pulling from Naomi Woolf’s The Beauty Myth, the main source of yuks is that Jeong is intruding into the creation of beauty pornography, causing a humorous disjunction. He is not supposed to be there. But why does his intrusion cause laughs rather than ramping up the sexual tension? For instance, even when Jeong is in bed with the couple, the viewer is never led to believe that this could turn into a menage à trois. If you think I am making too much of it, consider how the screen capture below would be different if it were the male model posing as Jeong does 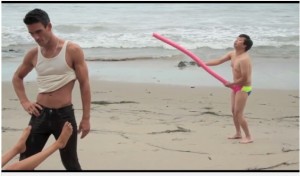 There are two factors that account for the humor in the video. The first, and less insidious of the two, is that he calls our attention to the absurdity of this type of image. Note the moment at around 01:00 when Jeong playfully bites his own bra strap. It looks ridiculous on him, but it is not at all inconceivable that we might see a shot of a woman doing this in any number of men’s or fashion magazines (commentary about a woman consuming the accoutrements of her own sexuality will have to be saved for another post). END_OF_DOCUMENT_TOKEN_TO_BE_REPLACED