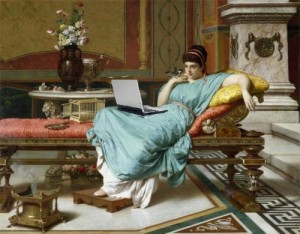 In just a few weeks it will be time to bundle up and head to Chicago for the 2014 meeting of the Modern Language Association. I will be presenting at the convention on Saturday in a panel called “Making Digital Counterpublics.”

I am very excited to be presenting alongside folks from JustPublics365, Beautiful Social, and Ed Reforms for Undergrads. Our moderator, David Parry from Saint Joseph’s University, will begin with an introduction, which will be followed by a 5-7 minute presentation from each project. Then Dr. Parry will have some discussion questions for the panel before it opens up to audience participation. The abstract for my talk reads,

Knight will discuss Fashioning Circuits, a project in the Emerging Media and Communication program at UT Dallas. Coursework for Fashioning Circuits is completed through independent studies in which students read and discuss theories of fashion, gender, and global labor. Students perform critical analysis of wearable media on a group blog (fashioningcircuits.com) and produce wearable media objects, most commonly with the open source Lilypad arduino. Knight’s presentation will focus on how the project helps students envision themselves as makers. The supportive and inclusive environment in which all participants are amateurs dedicated to co-learning fashions an alternative public that draws upon the ideals of Pierre Lévy’s “collective intelligence” while challenging dominant discourses of hyper-masculine brogrammer culture

Knight suggests that students are learning through processes of experimentation and failure while in a state of distraction, similar to that described by Walter Benjamin in “The Work of Art in the Age of Mechanical Reproduction.” In addition to their own practice, students extend the project beyond the classroom by participating in community workshops and summer camps introducing young girls to making and coding through electronic fashion.