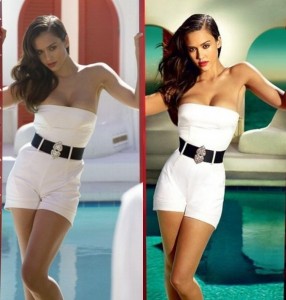 In the midst of the extreme Photoshopping, CGI, and robot models, there has been a quiet rebellion that has recently gotten louder.  The inevitable backlash against the fake perfection afforded by available technology has also found its home on the web, and one of the biggest up and coming advocates is 14-year-old, Julia Bluhm.

Julia is at the age when most girls are really starting to get into makeup, fashion, and boys; the age when a girl really starts caring about her looks and her body image. Unfortunately, most girls look to the models in their favorite magazines as a guide for what they should look like, instead of real women that they already know. And even more unfortunately, those women that they see in magazines, on top of being in the top tier of typical beauty standards, are also heavily makeup-ed, airbrushed, and Photoshopped.

So, she decided to do something about it, and started a petition on Change.org asking Seventeen Magazine to include one real, unaltered spread in their magazine each month. The petition has gotten over 55,000 signatures in 18 days, and has received attention on websites such as Yahoo.com. The editor-in-chief has asked to see the petition, and there is a scheduled protest, but no real response from Seventeen yet.

Even 15 years ago, when I was in Julia’s shoes, Seventeen Magazine was full of impossibly pretty girls that definitely made my awkward stage that much worse.  My parents saw that, and bought me magazines with real girls in them, but they were not the mainstream magazines that my friends were reading, so unfortunately, they didn’t have the same impact that the same real spreads would have had in Seventeen, Teen Magazine, or any of the other mainstream magazines.  What would it have been like to see a normal girl who had blemishes and a real figure.  Would I have respected her as much as I did the spreads with models, or would I have discounted her the way I did the girls in the off-brand magazines my parents bought me? END_OF_DOCUMENT_TOKEN_TO_BE_REPLACED