Fluid Interfaces, the media lab at the Massachusetts Institute of Technology (or MIT), recently unveiled its latest masterpiece, the FingerReader. The FingerReader is a 3-D printed ring with a mounted camera that scans text and reads it aloud to the wearer.  Special software scans the text and gives both audio and haptic feedback, letting the wearer know things like where the line begins and ends or to move to a new line. The algorithm can also detect and give feedback when the user moves away from the baseline of the text. The FingerReader is a device that could prove to be useful not only as a tool for the visually impaired but also for second-language learners, people with dyslexia or other language disorders, young children, victims of brain trauma, and tourists. 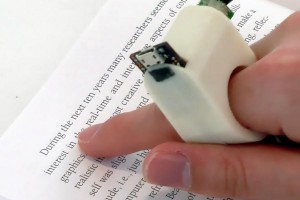 Ring in use; Fluid Interfaces, MIT

Fluid Interfaces as a group defines its purpose fairly simply: They want to create wearable interfaces that augment the human senses and capabilities, interfaces that can give the user a more natural experience with fewer distractions.  The FingerReader is still just a prototype and has not been tested extensively, but its aspirations seem fairly in line with Fluid Interfaces’ vision. Still in development, the FingerReader’s language translation abilities have not been implemented, but eventually this, along with the ability to connect to a smartphone or mobile device, is definitely in the game plan.  According to Roy Shilkrot of Fluid Interfaces, the current market for the reader is about 3%, which is the percentage of the population that is visually impaired.  Because the device is still in development, Shilkrot declined to speculate on pricing, but did say that the team is relatively confident that they will be able to sell the reader at an affordable price. Additionally, Shilkrot says that the group may make the decision not to commercialize the product themselves. If this ends up being the case, Fluid Interfaces will open-source the project so that others can continue to improve the technology or repurpose it for other uses. See the FingerReader in action here.

When asked what kind of competition the FingerReader faces from existing applications and how the reader is different from them, Shilkrot is quick to point out that the project is still an academic one at this point: “We are not in competition with any of the alternative commercial products.” The Fluid Interfaces website helpfully provides a list of alternative applications, complete with links. Their provided list is as follows:

EyeNote (from the US Bureau of Engraving and Printing): http://www.eyenote.gov/

The vOICe Seeing with sound: http://www.seeingwithsound.com/

The social implications for such a product are many and far-flung. The FAQ sheet available on the Fluid Interfaces site addresses one big question: Will this be the end of Braille? The answer is surprisingly ambivalent. No, the group does not believe that the FingerReader will eventually eradicate Braille. But. As the technology improves, more testing is done, and the reader is more “robust”, there is a good chance that it could replace Braille. Besides, the fact sheet points out, only a fraction of books are printed in Braille. Not only can the FingerReader assist the visually impaired in the day-to-day necessity of reading, but can open access to a much larger library. Braille would still be convenient for those things a person may not want to hear read aloud to them, like health documents.

On the down side, this news has arrived on the heels of the 200th anniversary of Louis Braille’s birthday, and advocates for the blind community are concerned. Only 10% of blind children are learning Braille today, and in cases where the child is at least partially sighted but will eventually succumb to total blindness, teachers are putting more emphasis on regular print and eschewing most if not all instruction in Braille. Because of the growing list of apps available to assist the visually impaired, the importance of Braille has plummeted.  These statistics, provided by the National Federation of the Blind, also claim that 85% of visually impaired children attend regular public schools where the teachers rarely have the training to instruct students in Braille. This lack of training in Braille is cause for concern because Braille is the only system that gives the visually impaired the ability to read and write. Knowledge of Braille has been linked to employability and is, overall, the best chance of leading a full life for the profoundly blind. Without it, those who suffer from visual impairment are essentially illiterate.

With these facts in sight, the question of whether advances in assistive technology help or harm is an extremely valid one. The FingerReader has applications, language translation, for example, that completely circumvent the issue of visual impairment. It also has a bright future ahead of it as a teaching tool. Will it discourage the visually impaired from learning to read Braille? Maybe no more than any of the currently available audio apps being used to assist the visually impaired in their daily lives. However, the sleek, unobtrusive design of the FingerReader coupled with the promises of even better technology to come may make it simply to good to pass up.

The FingerReader: A Wearable Device to Support Text Reading On the Go. 2014. Boston, Massachusetts.