Have you ever tried studying on a college campus? It’s not the easiest thing to do by any means. Loud conversations abound, the library is full, there’s nowhere to sit, etc. Every semi-studious college student has experienced it. But what if there were an easier way to find somewhere quiet to study? That’s where the thinking cap comes in. The thinking cap is simply a cap with a GPS module in it that the user can activate by pressing a button, geotagging their current location. This data is then uploaded to a map of your campus showing suitable places to study. All you have to do is look at the map and pick a spot.

The construction was quite simple. An Adafruit Flora wearable electronic platform was connected to an Adafruit Flora wearable Ultimate GPS Module and a small button by means of conductive thread and sewn into a cap. The electronic platform and GPS module were installed on the underside of the cap while the button was installed on the outer rim for easy access, so it looks just like any other cap, but with a small button on it.

The programming was done through the Arduino open-source coding software. The basics of the code were openly available through Adafruit’s learning module on their website, but getting them to work together was another story completely. Originally, the cap was going to have a built in microphone that would measure the decibels wherever the user was and if they reached a certain threshold, the unit would then geotag that spot as somewhere that wasn’t suitable to study, but I could not get the microphone to work correctly. Fortunately, I feel that the button is a better design because users could tag spots that might not come up with the microphone design. Along the way, the process became more difficult when I tried connecting the Adafruit Flora to the software to upload the code. Adafruit’s Flora isn’t natively compatible with the Arduino software so it would not recognize the unit. Finally after searching for about an hour, I found a hack to Flora-fy the software making it compatible. The next hiccup came from installing the Adafruit GPS library, without which, the data coming from the GPS unit was useless. Once I finally installed the GPS library, the raw GPS was translated into useable data and my location was found.

That was as far as the project got. The portion where the data was then uploaded to a map would have taken a significantly higher amount and level of coding. Perhaps it could become a capstone project, working on it across an entire semester.

As far as concepts go from our readings, the best one that comes to mind is regarding making the technology fashionable. Nobody wants to wear something useful if it looks tacky. It doesn’t matter what it does. You could have a bulky wearable computer that stores every bit of useful information you come across throughout the day, but if it doesn’t look good, it won’t be worn. That’s where wearable tech like Google Glass and the Samsung Galaxy Gear smart watch come in. They are incredibly useful and they look good. Fortunately, my piece’s technology is very discrete and looks basically like a normal cap. 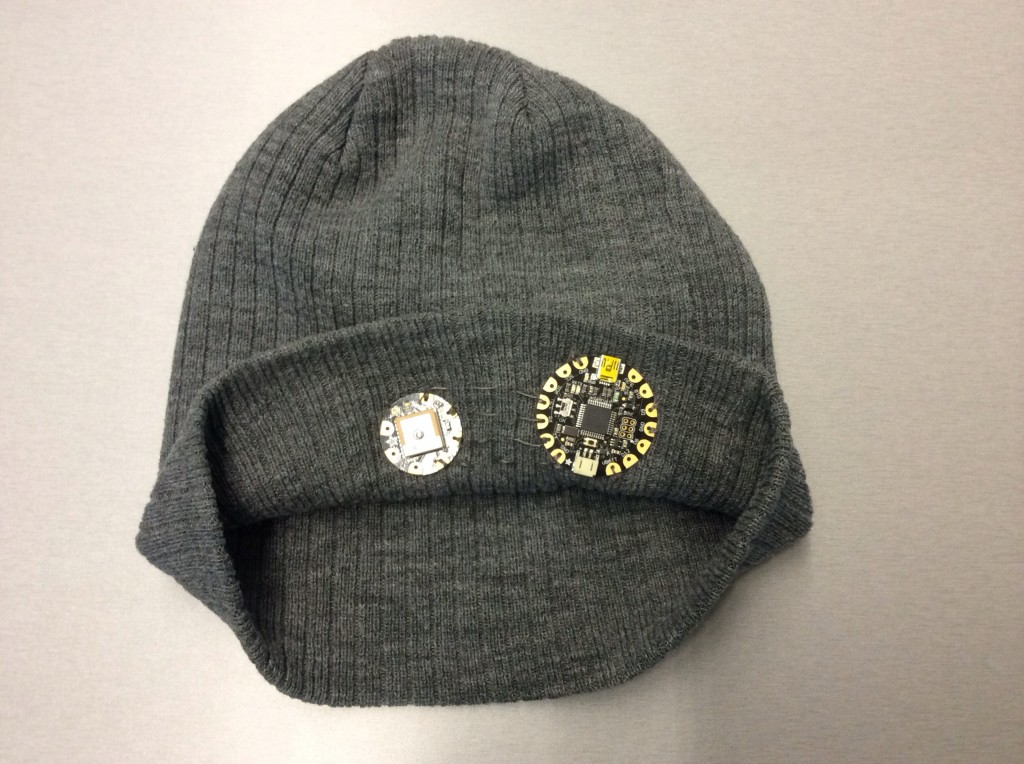