Technology as a wearable fashion in something of a novelty in today’s day and age. But what about as integrated fashion? As many a sic fi movie has suggested, technology will eventually be integrated into us. At that point all the information we need will simply be attached to you, in fact, an actual part of you. Ouch my data!

This piece explores the concept, and uses the second best thing we have to such powerful devices: one’s phone. It’s no secret we have all adapted to our phones and integrated them as part of our lives. This piece uses the smart phone to demonstrate there really is only one difference between then and now, where its all located. The rest of the design is sleek plating with futuristic aesthetics adorned throughout the piece.

I modified a lycra evening glove by extending it to fit the whole arm. I made molds/ models of my arms with plastic wrap and tape. I used these as a base for the size I would need. From here, I could cut shapes with approximate size and angles to fit my arm. Once I had the shape silhouette, I began to design what the plates would look like. I went back and forth and cut out bits to better fit the shapes of the arm. This also allowed extra movement and freedom for physical locomotion.

Once pieces were completely designed, they were cut out to be used as templates. Then I took the individual templates and traced them onto a High Impact Polystyrene board with a 1/16 inch thickness. I cut out along the lines best I could, and used large metal files to refine the edges. Once satisfied I took to sanding the edges down for a more rounded look, also smoothing out choppy edges.

Next I molded the pieces. I used a heat gun to make the styrene become tacky so I could shape it. I used some heat resistant household items to help bend and flare the plates to my liking. After a few guess and check sessions I had them working for me so I moved to paint.

After the pieces were molded, I primed them, painted three coats of my chosen color, and sealed with enamel. After I sealed a couple coats of enamel, and pieces had dried, I began to add the bits and bobs. I cute the ends off brass push pins for rivets and used assorted pipes and wires, along with caps and reflectors to give it a futuristic feel.

I then took some model paint and painted my wear and tear, making it feel more used like an actual augmentation would. After that, I stuck some velcro in a few key points I thought would hold best.

Earlier I had partially modified a phone case to wrap snug around my arm. After the glove is on, I snap the phone into place, and set the finished plate on top. The rest just velcros to the glove for effect.

My biggest pitfall was cutting the styrene. I was unequipped and had to heat it to cut all the way through, a tedious task. A dermal would have done wonders. The molding was kinda fun after that. The paint didn’t stick as well as I would have liked, maybe it needed more sanding, but I’m sure the hot glue didn’t help. The hot glue was helpful, however its stringiness actually became an issue. The only other hang up is that I bought the wrong kind of velcro, so the shoulders will be strapped. Velcro is on the bottom half, although the hooks love to stick in the glove regardless. 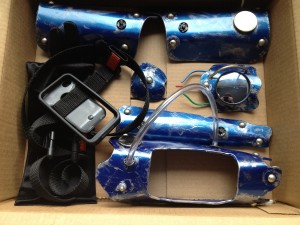