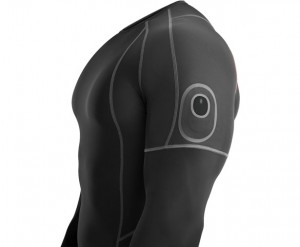 Feeling similar frustrations, Dhananja Jayalath and Christopher Wiebe, two gym-goers frustrated with their routines, decided to take action. Together, they “set out on a mission to help people improve their lives by providing actionable insights without disrupting their existing routines.” Essentially, the two individuals combined digital technology and performance wear to create clothing that will, in a sense, become your personal trainer. Thus, Athos was born.

Athos creates and produces performance wear that are fitted with sensors. These sensors accurately measure your physical activity and how your body is performing during a workout. From the data collected by the sensors, Athos can fine-tune how you move, spin, lift and so much more, improving abilities and enhancing form. The wearable technology can track your muscle groups, heart rate, breathing level and so on by using electromyography, which measures and evaluates electrical signals generated by your muscles. The data transmits from the sensors to a small module called the core. The core wirelessly syncs with Athos’ app, where all the information collects and displays to the user.

The module and garments include a three-axis accelerometer and three-axis magnetometer which provide orientational awareness, such as lying down or sitting up. Communicating via Bluetooth 4.0, the wearable technology can measure heart rate without a chest strap, provide precise, real-time interpretation of complex movements, measure and recommend proper exercise form in virtually any environment. Additionally, it can monitor muscle fatigue and recommend training levels, quantify and summarize the content of workouts and track training levels over time to help avoid over or under training specific muscle groups.

Expanding on the concept of the technology, it is plausible to look to other uses for the garments outside of the routine workout. For athletes, or even just the average person, the wearable technology could be used for physical therapy, monitoring how target muscles are being used and making recommendations for how to optimize the therapy. It could also recognize the fatigue of the muscle(s) as to avoid over-rehabbing the injury. In a profession such as chiropractic, who often look at balance in the body, it could help identify what areas muscles are over or under working, often indicative of an imbalance.

Athos is not alone in its pursuit of wearable technology however. Hexoskin, Omsignal, Adidas and even Ralph Lauren are beginning to or have already taken on similar projects. Hexoskin already makes a sensor-enabled smart shirt that measures heart and breathing rates while also tracking movements. Athos has taken this concept even further, while also offering the product at half the price. Hexoskin’s product goes for about $399, while Athos’ goes for roughly $199.

While it is arguable that Athos’ wearable technology cannot account for all the things that a personal trainer does, it certainly does impose an interesting and potential reality for that particular business moving forward. If people can access such information in regards to the performance of their own bodies without needing the consultation of others, does that jeopardize the industry and profession of exercise specialists? It is a question that has ample evidence to reinforce both sides of the argument. Regardless of the eventual outcome, Athos has certainly provided for an interesting beginning to a potentially blossoming line of wearable technology.