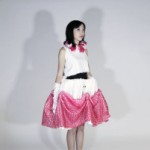 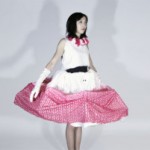 Last week, an acquaintance of mine posted a status on Facebook that said the following: “Yep, you pretty much give up any personal boundaries when riding the tram– some awkward ear caressing and arm caressing happened today.” Several things struck me about her post: it’s extremely matter-of-fact; no one who witnessed this event attempted to stop it; and the post received likes, rather than outraged comments. No one actually seemed terribly surprised that she faced unwanted and “awkward ear caressing” and “hand grabbing” from a stranger. It seems like for many people (especially those who identify as women), physical harassment is just one of those things that you are expected to put up with to exist in public spaces or utilize services.

Enter the the Personal Space Dress. Designed by artist Kathleen McDermott, the dress utilizes wearable technology to expand when someone gets too close to you, therefore preserving your personal space.

While this technology could be utilized in a variety of other situations when one may want to preserve personal space (like for those on the Autism spectrum who dislike some physical contact) it’s clear from Ms. McDermott’s video of the dress that her vision was for use in crowded places like public transit, where proximity can create opportunity for unwanted sexual contact.

The dress works by using ultrasonic sensors to detect when someone (or something) is too close, which send an impulse that causes continuous motors to expand the dress outwards, like a hoop skirt. It shrinks back to its original size when the area is clear of the perceived threat.

Ms. McDermott notes on her website that this dress is not a product, but rather, an artwork meant to spark discussion. In a country where 65 percent of women are expected to experience public sexual harassment (via Stop Street Harassment), that’s always an admirable goal.

However, the design of this dress limits the conversation in several important ways. It’s pink. It’s frilly. It has more than a passing resemblance to a cupcake. None of these characteristics are inherently bad, but they do reinforce the narrative of feminine, cisgendered, heterosexual women as the only victims of sexual harassment. According to a report published by the organization Stop Street Harassment this year, 25 percent of men surveyed had experienced street harassment, and people of color, lower-income people, and people who identify as LGBT are all disproportionately affected. All people need to be safe in public spaces—not just those who embody traditional femininity and the discourse should reflect that.

The Personal Space Dress does unfortunately also remove the topic of consent from the discourse. Because it relies on “dumb” technology and cannot discern the difference between wanted and unwanted contact, the wearer is effectively cut off from any touch, even those enthusiastically consented to. It also puts the burden of responsibility on the wearer to protect themselves, rather than promoting a shift in culture that would render it useless. Once again, victims are expected to arm themselves against threats—hardly a revolutionary concept—and it’s easy to picture a society that blames all victims who don’t wear the Personal Space Dress for being harassed.

Related projects include a Tumblr blog called “Men Taking Up Too Much Space on the Train (a lighthearted project that shows the ways in which men’s needs in public space are prioritized over women) and Stop Telling Women to Smile, an art series that addresses the impact of gender-based street harassment on its victims. Other projects in Ms. McDermott’s Urban Armor series include a veil that protects your identity from CCTV cameras and a robotic scarf that protects the wearer from pollution. While all three projects concentrate on ways that technology can protect the wearer, the Personal Space Dress is the only one that not only avoids unwanted situations, but addresses them head-on.