This blog post was written by, and highlights the Fall 2014 final project of, EMAC undergraduate student Justin Ozuna. Follow him on Twitter @TheOzunaVerse. The assignment for which he made the project can be found here. 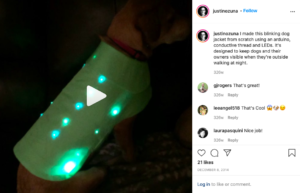 Photo: Screenshot of the Blinking dog jacket with Arduino, made by Justin Ozunan

Pet ownership is a way of life in the United States. According to humanesociety.org, more than 80 million dogs are pets in U.S. households. Eighty million! For perspective, there are an estimated 316 million people living in the United States. Nearly 47 percent of households own at least one dog, and the upward trend doesn’t show any signs of decline in the near future. In fact, pet ownership has nearly tripled since the 1970s.

Where there are numbers, there is a thriving industry. Americans will spend $58 billion on all pets combined this year. Walk into any store and there’s likely to be an aisle (or two) of pet food, snacks, toys and accessories. What you won’t be able to buy in the store, however, is time. After a long day of work and a full schedule of evening activities, Fido is ready for a long walk. The problem is that there’s not always time to take your pet for a stroll in the neighborhood before the sun goes down and the stars fill the sky. Walking your pet at night means you’re at the mercy of overcautious drivers and hyper-focused neighbors to stay safe.

The LED Safety Jacket draws attention to pets and their owners when visibility is at a minimum. The jacket’s exterior is lined with a pattern of LEDs that blink to keep you and your pet visible after a long day of work, school or grown-up responsibilities. The exterior fabric is made of a lightweight breathable material and is lined with a soft interior to keep your pet comfortable year round. The LED Safety Jacket means there is no more worrying about the threat of cars or creeping up on unsuspecting neighbors.

The jacket meets a societal need in an economy that has blurred the line between necessity and privilege. In case you missed it, Americans spend $58 billion (with a ‘b’) on pets in a single year. What we spend on our furry friends is enough to help close the gaps between poverty and prosperity. There are 49 million Americans who struggle with hunger every day. The amount of money generated by the pet industry is equivalent to feeding 2.3 million families for nearly one month. I’m not suggesting families abandon their pets to provide food to needy families. There are other ways to meet those needs. It’s just that this project raises questions of privilege in America and the acknowledgment of societal hierarchy. What some people might spend to keep themselves safe, others would spend to keep their families fed.

When considering products within the pet industry, it’s also important to understand the methods of production. Corporations are constantly under the spotlight for endorsing sweatshops in underprivileged countries. Industries driven by cheap labor and maximum profits have objectified workers around the world. While I’m unaware of the origins of the parts I used, I can assure you that nobody was exploited in the making of my LED Safety Jacket. [Editor’s Note: To the best of our knowledge, all of the Lilypad supplies are manufactured inhouse at SparkFun]

If you’re keeping score at home, here’s a simple tutorial for my completed project:

2. Choose three layers of fabric: one exterior cloth that is thin and permeable (so the LEDs can shine through), a durable interfacing, and soft interior liner that is comfortable against the skin of your pet.

5. I used 17 blue and white wearable LEDs and added 4 regular LEDs to create a brighter light on the side of the jacket.

Photo: Distribution of the lights on the jacket

6. Use your pattern to determine the amount of fabric you’ll need, then cut out the pattern and use it to cut your fabric.

Photo: Cut out the pattern and use it to cut your fabric

7. Lay out your LED pattern on your interfacing. Draw a network that connects your LEDs to the Lilypad (including the ground). Once you’ve designed your network, glue each LED to the interfacing for support and sew your Lilypad using regular thread. Be sure to locate it in an accessible location.

8. Using your conductive thread, connect each positive LED to each other and build your circuit. For this project, I have two circuits. One down the middle of the jacket and the other on the periphery. [Editor’s Note: This could also be done with button state changes on one circuit]

9. Once you have the circuit built and connected, test your circuit to make sure everything is working properly.

10. Now it’s time to sew. Using the instructions on your pattern, begin sewing the three pieces together.

11. Attach the straps and sew on the Velcro.

12. Once it’s complete, you can create your code and upload it using the USB cord.

13. You and your dog can now safely walk throughout the neighborhood in the evening or at night! See the jacket in action: