Eric Kee and Hany Farid of Dartmouth College have developed ‘A Perceptual Metric for Photo Retouching‘. Meant to detect and rate the amount a photo has been altered on a five point scale, this tool has some very interesting implications towards the future use of manipulated images within the fashion industry. Although photographs and images have always been subject to tampering, it is more recently, with the proliferation of tools like photoshop, that editors and advertisers have come under fire for using highly altered photos. 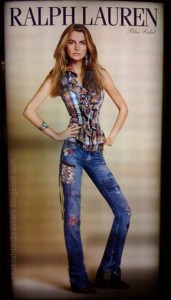 In June, the AMA issued a press release outlining a new policy around “body image and advertising to youth” requiring advertisers work with child and adolescent health organizations to establish guidelines around altering photographs. After viewing some of the offenders, it’s curious how some of these images got through review. One of the more prominent examples is a Ralph Lauren ad (Right) where Filippa Hamilton’s waist appears thinner than her head. Ralph Lauren issued a statement apologizing to women for the ad then subsequently terminated the contract with Hamilton reports Today.

The UK Advertising Standards Authority has also been cracking down on ads that have been airbrushed or portray “too-thin” models. The BBC reports on L’Oreal images banned due to ‘mis-leading’ photo air brushing. The organization is considered the advertising watchdog for the country and bans any images that might be misleading or socially inappropriate.

Brandon Keim reports for Wired explaining the “computational model developed by analyzing 468 sets of original and retouched photographs. From these, Farid and Kee distilled a formal mathematical description of alterations made to models’ shapes and features.” The five point scale used to rate the photographs was validated through interviewing people around their opinions of the image. Through Farid’s research he has found that more drastic alterations are being made as advertising progresses.

As tools like this emerge and new standards around advertising are put in place – will the effect of these photo shopped images remain? New standards would theoretically help make consumers more aware about the veracity of an image. The problem is that phographs already hold some value that I don’t believe can be negated with just text. The true nature of photography is meant to capture something that is not always possible to be seen with the naked eye. Darkroom photography development techniques were always available but photographs tend to have some inherent quality that begs the viewer believe they are real. Everyday we are surrounded by images – some manipulated through the use of photo editing software, some original. There will come a point where a strong majority of the photos we consume have all been digitally altered, yet the viewer still sees the image. It would seem the proposed disclaimer that a photo state the value of its alteredness would ultimately hold very little value.

One Response to “Questioning Veracity with New Retouching Detection Tool”