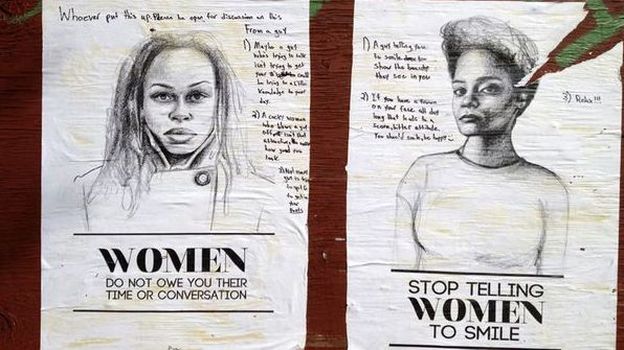 When saying, “I’m not interested,” is no longer a clear enough signal to leave someone alone.

In our modern society, it is increasingly difficult for many people to communicate in a direct manner without experiencing apprehension or anxiety. These people may not feel comfortable with social interaction, which may cause them issues with being direct or upfront towards others.  This awkwardness can sometimes lead to uncomfortable, threatening,  or even violent situations. For many people, technology can function as a “screen” that allows them to opt out of real-life, face-to-face interactions. When communicating online, users can set statuses on instant messaging systems (“Do Not Disturb”, “Available”, “Away”) to indicate their availability or willingness to chat.  But what happens to them when they do not have a screen to hide behind and they need help communicating their status to others? If there was an easy passive way for people to clearly communicate their receptiveness to outside interaction, it could potentially prevent miscommunication, confrontational situations, and unwanted advances.  Enter the Instant Status Band.

My purpose is to create a wearable object that uses colored LEDs to serve as a passive invitation or warning to outside parties wishing to approach the wearer. It uses common color associations to convey the communication availability “status” of the wearer: Red means “Do Not Disturb” or “Warning/Alert”; Yellow means “Away” or “Caution”; Green means “Available”; and Blue means “Passive” or “Indifferent”. Separately from the communication statuses, White is available as a fun partywear option. An added component of the headband would be that with a push of a button, the accessory would log the GPS location of the wearer if they felt in danger with the hope that the information could be relayed via SMS to a user-determined safe network.

The intended target audience is most likely females, ranging from pre-teens to mid-twenties; I chose this audience based on both my personal and classroom experiences and the desire for such an object to exist. Its intent is to address the issues or concepts surrounding social anxiety, technology as a means of communication, sex positivity (abstract), rape prevention (abstract), and social justice (abstract).

Concept: I considered either a fabric scarf or headband for the wearable base of my project  due on the visibility factor on the body (neck and head, respectively).

Reality/Execution: I settled on the fabric headband based to the ease of everyday wear, with special consideration for dress codes and climate conditions where a scarf might seem out of place, or oppressive/insubstantial for the climate.  The headband is based off a basic five-piece pattern: two pieces for the body, three pieces including the elastic for the casing. The headband design potentially limits the audience but future design considerations include a fully unisex-friendly scarf design for broad adoption.

The choice of black background with a multi-colored dot patterned fabric was to help blend the components (the LED rings, wires, battery, switches) into the headband when in an powered-off state. 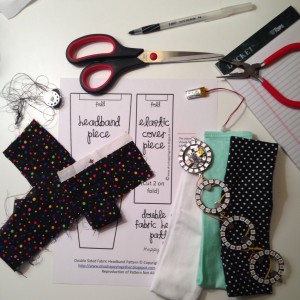 MATERIALS
Concept: I originally intended to make the fabric headband out of fiber-optic fabric that lights up using colored LEDs.  I planned to use materials from the LilyPad Protosnap development board for computing  (simple board), button (momentary push) or switch (slide switch) to control the three colors.

Reality/Execution: The fiber optic fabric was very popular and routinely sold out on SparkFun. The restock timeline wasn’t conducive to the project deadlines so I decided to go with regular cotton fabric fabric base for the headband. I ordered both Adafruit Smart NeoPixel individual LEDs and five NeoPixel 16-LED rings for the light-up component. Since I had never used Adafruit products and was working on a condensed timeline, I wanted flexibility in case I wanted to switch designs. This later became an ongoing theme of this project.

Because I was using the Adafruit LEDs, I opted for the Adafruit GEMMA board to avoid potential compatibility issues. Its size, computing ability, and wearable design purpose made it a logical choice.

Troubleshooting: I ordered extras and alternatives to several of the materials for “just in case” scenarios. That turned out to be a life-saver for certain parts of my project that were damaged due to lack of experience, mishandling, mistakes, and a few factors outside of my control like manufacturer defects. Several of the items I assumed I could find locally in hobby and craft stores like Michael’s, JoAnn Fabrics, and Radio Shack were not available. I found some on Amazon and other e-Commerce stores but my failure to thoroughly research the availability of my supplies was a costly mistake (both in time and money).

Know your strengths and weaknesses. Also, have beer and back-up plans.

Concept: Prior to executing this wearable project, my biggest challenge and concern was having he ability to execute this from a technical perspective.  I knew the geotagging and SMS feature to accompany any use of the “warning” indicator color would be difficult seeing how I had no programming experience and I did not know where to start. During our project evaluation stage, Professor Knight recommended that I drop this component in order to successfully execute within the project timeline.

Reality/Execution: Instead, I focused on the colored LED status part of the headband. After switching to the NeoPixels, I planned to sew the individual pixels on a continuous “chainable” circuit but found a tutorial on the Adafruit website that used the Neopixel Rings that could easily be incorporated into a headband. Ah ha! “Work smarter, not harder,” the old saying goes. However, simply because a tutorial exists online doesn’t mean that it will be without trouble…

Troubleshooting (Build): Initially, I considered using three separate buttons for each status but I realized it would be cumbersome. People far more experienced than me suggested using a potentiometer or make my own fabric button. The potentiometer did not work due its height profile and wearability factors. The fabric button was very intriguing due its soft design but I wasn’t sure if I would have room on the headband for a large fabric button. I recalled one of our class workshops that included experimenting with a momentary push button on the LilyPad Protosnap. Its small size and large pads made it ideal for my project requirements; I later read that it was designed specifically for wearable projects.

Now to connect all of these parts into a working circuit with soldering. Ask me how I feel about soldering and I will answer, “#$@(%*#@!” Most of my build problems were related to learning a new skill with a tool that could potentially damage all of your components and fingers.

Below is the circuit diagram minus the additional wiring required for the separate battery, switch, and button. It seems easy and straightforward enough, right? If there were horror movies about soldering school projects, those would be the classic newbie last words.

Some of the pads (holes) were large enough to accommodate the two types of wire: multi-stranded covered wire and a higher-gauge (e.g. thicker) less flexible wire with fixed length known as jumper wire. In these instances, the two wires filled up the hole and it was easy to melt solder around the opening. Unfortunately, there were only a few of those soldering opportunities. These remainder of the multi-wire torture exercises required these wires to be threaded into the tiniest of pads, nestled directly in between easily meltable LED housing.

After hours (yes, I am ashamed and embarrassed to admit), I managed to give myself two raging blisters, multiple burned wires, melted LED housings, and countless solder scraps but at least I semi-successfully soldered all my joints. They are “beautiful” in the way that most people would use the terms “functional” or “scrappy”. The biggest obstacles were lack of “wettability” and poor heat transfer from the iron (both rookie mistake and somewhat remedied after reading soldering reference guide), as well as burning myself and huffing soldering fumes. In hindsight, I would have preferred to spend more time practicing soldering on spare parts but I was already working with borrowed equipment on borrowed time.

Special thanks goes out to Harrison Massey who expertly (and sometimes unsafely, much to Professor Knight’s chagrin) taught me how to solder. If you are new to soldering, do not try this at home without training, initial supervision, safety goggles, a protected work surface (I used cardboard) and perhaps heatproof gloves. In any case, having Neosporin nearby isn’t a bad idea either.

Other build woes included not one, but two malfunctioning sewing machines (again, working with borrowed equipment). One machine jammed when the needle broke and and the other machine’s presser foot & feed dogs did not work; it also refused to catch the bobbin threads. I also didn’t adequately compensate for drying and curing times on my adhesives so that added some delays to my build execution. If I had better managed my time and in-class resources, I would not have experienced the panic that comes with uncooperative technology.

Troubleshooting (Code):  Having little experience with programming languages, I anticipated some issues with the coding but this turned out to be one of the easier aspects of this project.  The in-class workshops centered around the fully Arduino-compatible SparkFun LilyPad ProtoSnap and Twinkle boards. Earlier I mentioned that I wanted to use Adafruit pixels so I opted for the compatible Adafruit GEMMA. Again, this board was designed with wearables in mind and there were multiple tutorials using GEMMA and Neopixels so I believed this to be the path of least resistance.

There were some obstacles with GEMMA, namely that it was not fully compatible with Arduino straight out of the box (or baggie, in this case). It required a several modifications, all of which are detailed on the Adafruit website. Any problems I had with my code not working or Arduino not cooperating generally stemmed from these compatibility issues or improperly installed libraries.

Outside of the sine wave pattern code from the Adafruit tutorial, I heavily referenced the tech workshop texts, Arduino Language References, and Arduino Learn the Basics (specifically the Arduino Button tutorial). Adafruit also has a NeoPixel library on GitHub for examples. The Arduino, SparkFun, Adafruit and r/arduino forums were also great places to read about other people’s projects and get help with coding issues.

I constantly experimented and tested my cobbled-together code, referencing the texts or searching online when unfamiliar error messages popped up. Using spacing tabs and comments in the code was helpful to understand  the purposes of certain commands and correct simple coding mistakes like == (comparison) versus = (assignment).

As an independent study course, time management is key to a student’s success. This project was an expensive learning experience fraught with failed time and project management exercises. However, I did walk away from this project with a cursory understanding and greater appreciation of Arduino programming language, DIY wearable technology design, and soldering skills. I will take my victories where I can, no matter how small.