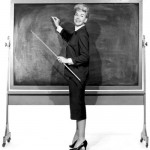 What could wearable technology do for teachers? As a former six year middle/ high school teacher and coach I can recall times where I was put in a place of fear from false and frivolous accusations from a student with nothing but my character and integrity to defend me. Through the struggle of vindication I thought that teachers should have a high tech defense mechanism to prevent malicious future events. A taboo issue that pops ups sporadically in nightly news, yet always shocking, are the inappropriate relationships between teachers and students. Not only would a wearable possibly diffuse situations of ‘my word against yours,’ but it would serve as an accountability resource when unknown offenders implant themselves within a school environment. I could only imagine the innocence that could be spared on account of social facilitation being monitored by a wearable.

In my own experience as a teacher, innovative technology was an expertise of mine. I would dream up something between google glass and Robocop. Not only for security and accountability, but I would think of review clips, resources for absent students, and even next year planning sessions all filed in video format. With products like Epiphany Eyewear and Memoto, technology is closer today rather than when I was watching 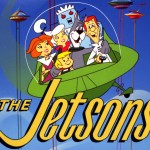 the Jetson’s in the 80s. However close we may be in the wearable world we still lack the progressive progress within the realm of privacy implications and policy. What could wearable technology do to the education system if all participants felt watched all the time? Would a Panoptic situation ensue? Who would have authority over the data? Would it really be a solution at the cost of the negatives in feeling watched all the time? 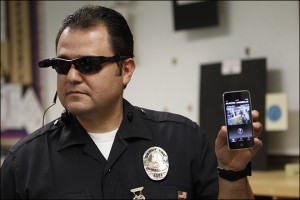 Figure 3. Los Angeles Police Sgt. Daniel Gomez demonstrates a video feed from his camera into his cellphone as on-body cameras are demonstrated for the media

Pittsburgh, Salt Lake City and Hartford, as well as Fort Worth, Tex.; Chesapeake, Va.; and Modesto, Calif.  would be a great point of reference to start. They have begun issuing wearable video cameras as a part of the standard uniform for police. These serve the same purposes that I found lacking resources in my teaching career. Each department have set up policies for when the camera should be activated and who has access to the video. Overall, wearable technology has a huge contributions for individuals who work with the general population, especially teachers who sometimes are in the trenches against students, parents, and even administrators. Had I been wearing a form of wearable technology I could have been spared the embarrassment of all of my students writing a written statement of me breaking up a racially charged fight ‘rugby style’ with the ‘two boys under each arm’ escorting them to the office.  In my wearable dreams I would have turned to the distraction, activated the video and said “smile your on camera.”