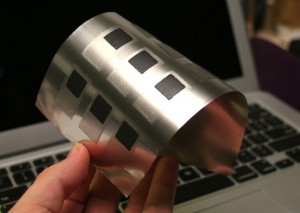 Most typical batteries are made using lithium as the primary charging component. However, lithium is highly reactive and very unstable. Primarily, lithium is oxygen-sensitive. In order for workers to handle it safely, protective equipment is required. To adequately seal the reactive lithium requires many protective layers. The result is a rigid, bulky, and limiting battery design.

While zinc has been used in batteries for years it was not possible to make zinc batteries rechargeable. In previous batteries, zinc was combined with a liquid electrolyte. Over time this combination produced dendrites, which are tiny fibers that grow and prevent the charging reaction from taking place. As a part of her graduate studies, Ho developed a solid polymer electrolyte that avoided dendrites. She combined this new polymer with zinc to create Imprint Energy’s battery. Because of zinc’s environmental stability, Imprint Energy’s batteries do not require heavy and rigid insulation. Additionally they are cheaper to manufacture and do not require workers to wear protective equipment.

The main barrier to innovative technological design is the battery. Lithium-based batteries are made by coating materials onto foils. The foils are then assembled into cells. However, because they are so bulky it is almost impossible to create a sleek and flexible design. For example, the Nike FuelBand is a flexible activity tracker. The FuelBand uses a curved lithium battery, however the battery compartment is the only part of the band that is not flexible.

While a device may be technologically impressive, design plays a big role in how well it sells. While having a slim, safe, and flexible battery is ideal, it is currently not the standard. Imprint Energy currently only has two printing machines, but soon hopes to expand. Ideally, the company’s end goal is to enter the wearable electronics market in collaboration with health sensors and fitness trackers, like the Fitbit, NikeFuel, and Shine. However, flexible batteries have a far broader application. In the future these batteries can be applied to other small portable electronics. In the meantime, Imprint Energy is currently working in collaboration with the US military to develop batteries for health monitors. The military hopes to expand on this project to be able to also track food and packages. Hopefully true flexible batteries will become an industry standard and allow designers to create freely and without the limitation that lithium batteries have. As Francis Bitonti, in the article Advances in design software mean “materials are becoming media”, said, “The separation between what you can simulate and what you can physically model is gone… the gap closes every day.”