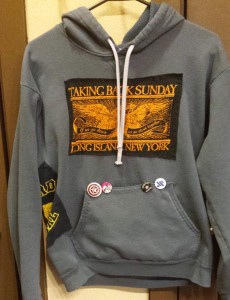 I started by laying out all the components on top of the hoodie for placement purposes. My original hoodie candidate was NOT going to work. Luckily, I had an back-up to use. From there I cut out a piece of interfacing to use as the base for my work. With everything laid out, I set out to create the soft circuits. This turned out to be a huge challenge for me. Having never made soft circuits before, I googled a couple of tutorials, and made a test out of felt, scraps, interfacing and conductive thread. Though the test button I made worked, the 5 others failed miserably and made my hands cramp. The felt wasn’t enough to keep the circuit open until I needed it closed, and I cut my finger when cutting out the felt. Clearly, this direction was too dangerous for me.

so I set about making a new type of button. This one had large knots of conductive thread on each side with batting in the middle. The batting kept the circuit open until pressed. Round 2 involved buying some lining material and an embroidery hoop. I sewed ten large knots in the lining material, cut them all out, and attached 5 of them to a pocket cutout of lining material. After that, I put down a layer of batting and carefully sewed the other 5 knots onto the top, making sure that a “tail” of conductive thread from each knot stuck out. Then I ripped out the seams to the front pocket of the hoodie to reattach the lining with the components to later.

On the lining cutout, I created a pocket to hold the battery, sewed down the LilyPad MP3, and glued the speakers into place. From there, I sewed down all the paths to the circuits. After a quick test, a lead to one of the speakers broke and had to be soldered back on.

Once everything was attached to the lining, I sewed it onto the front pocket in such a way that you could still put your hands in the pocket without disrupting any of the components. I also left the top portion fastened with button pins so I could still easily reach the power switch and micro SD card. One last test had me ripping all the seams again so I could re-solder another speaker lead.

With everything put together, all I had left to do was to load some songs onto the micro SD card and mount it back into the Lilypad MP3.