Figure 1. “Bio Couture” by Suzanne Lee – sustainable clothing made from the combination of bacteria, yeast, sugar, and tea

London-based fashion designer Suzanne Lee is a Senior Research Fellow in the School of Fashion & Textiles at the at Central Saint Martins College of Art and Design. She is also the founder and creative director of Bio-Couture, where her work centers around the production and manipulation of sustainable biomaterial textiles. Suzanne is exploring ways to grow cellulose material using a common fermentation method that combines a simple sweet tea solution with a symbiotic colony of bacteria and yeast to brew kombucha. This symbiotic colony of bacteria and yeast (“SCOBY“) naturally produces microbial cellulose.

What’s so great about cellulose? It is Earth’s most common organic material and serves as the basis of many plant-based fibers used for textiles like linen, cotton, and hemp. Cotton itself is comprised of almost 95% cellulose. However, cotton is becoming increasingly more expensive to produce and has a significant negative impact on the environment. According to the IDH Sustainable Trade Initiative, about 10% of all agricultural chemicals used worldwide are processed by the cotton sector. While there is growing demand for sustainable organic cotton, the market remains relatively small and the organization is still in the midst of an uphill battle making sustainable organic cotton a mainstream standard. 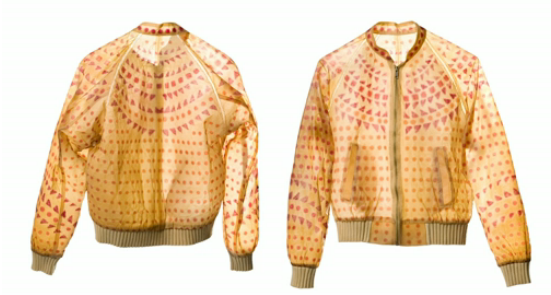 Sustainability is a key issue in both the textile industry and for the consumer markets. While organic cotton, linen, and hemp are available, they are still plant-based fabrics that require vast amounts of agricultural and human resources that are not wholly sustainable at the current rate of consumption.  With consideration to global climate change, rampant deforestation, and rapid industrialization, many pioneering entrepreneurs are looking towards alternative sources of cellulose for textile manufacturing. As an experiment, Lee is using the bacterial cellulose from the kombucha SCOBY to produce flexible cellulose “skins” to mold, shape, cut and sew into textile garments.

Microbial cellulose has a variety of advantages over plant-based cellulose, including the fact that it has greater tensile strength. Currently, Lee is growing the bacterial cellulose using the sweetened tea mixture but it can be produced on a variety of substrates; future plans include utilizing byproduct waste streams from the food industry to fuel the microbial-cellulose material production. Another advantage is that the bacterial cellulose can be grown to virtually any shape due to the high moldability during formation. However, the material is not without challenges though. Microbial cellulose  has a higher water holding capacity which makes it unsuitable for outdoor use.  Lee is working with scientists at Imperial College London to experiment with genetically modifying bacteria in order to produce microbial cellulosic material that could potentially be waterproof.

There are unanswered questions as to whether bacterial cellulose can compete with plant-based cellulose sources, and if its production is economically and commercially viable. With continuing fermentation research & development, the early stages of commercialization could see the use of microbial cellulose in economical applications for specialty products.

Lee’s experiment shows a welcome shift in the way materials are produced and consumed. Although the project’s outward focus is on fashion, it demonstrates the potential benefits of collaboration between the fashion and sciences disciplines in pioneering eco-friendly and sustainable alternatives to solve real-world problems.

The best part of this experiment is that even the consumer could easily attempt growing their own microbial cellulose. Imagine patching up a piece of your cellulose clothing with the cellulose you grew yourself; no more pricey trips to the tailors! If you are interested in trying to grow your own microbial cellulose, Bio-Couture created a helpful guide called “Grow Your Own Material” (available as a downloadable PDF). If growing and fashioning clothes out of homegrown bacterial cellulose fails, at least there will be wonderful kombucha as a byproduct.